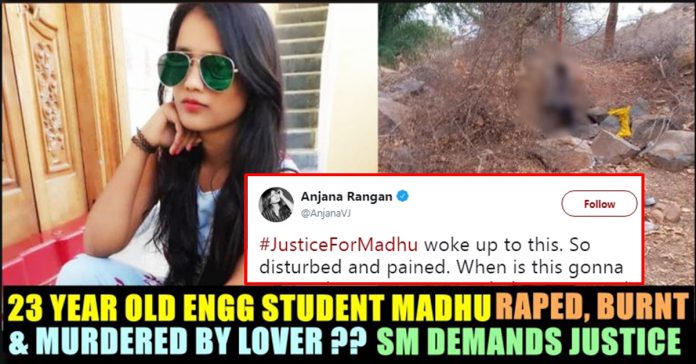 In a barbaric incident, the burnt body of a civil engineering student identified as Madhu has been found in Raichur shocking the conscience of the people. Suspicions have now been raised over the nature of the death of the girl.

The Raichur Police in Karnataka alleged that they retrieved a death note which claimed that the student committed suicide as she had failed in her exams. But the students and residents of Raichur refused to believe and said that she was raped and later hacked to death. The body was also seen burnt and was hanged to a tree.

Hundreds of people held a candlelight march in Raichur’s Teen Kandil Circle and urged the state government to take required actions against the culprits who claimed her life.

There was a suicide note found along with the dead body which said: “I am the reason for my death.”

Meanwhile, some reports suggest that the accused, identified as Sudarshan Yadav, has been arrested by the police. However, students and locals continued to protest on the streets for justice. A hashtag — demanding probe in the matter and to bring media attention to the case — was also trending on Twitter.

Where is the humanity? According to sources Madhu a Raichur ,engineering student was raped, murdered.. this truly breaks my heart..how many more like this beforeit stops? #JusticeForMadhu ..Hope justice is given.. and this comes to an end..😔

Singer Chinmayi Sripaada tweeted that she has been receiving messages from the victim’s classmates to highlight the matter. She later tweeted that as per the latest reports, the accused has been arrested.

Been inundated with messages of students who are talking of a brutal rape of their classmate in Raichur.
Any reportage on this? #JusticeforMadhu

The police have registered a case under IPC section 302 and 376 and an investigation is underway. “Sudharshan Yadhav has been suspected and is arrested. After two days the post-mortem reports will be out, only after the post-mortem report we will know the clear reason for her death,” SP D Kishore Babu told reporters. Social media erupted for the mainstream media being mum about the issue. They seek justice for Madhu :

Donno wat to write. Whr dis world is heading to. #Government has to give immi death sentence to those who r raping n murdering the females. Whn is this goin to end #Justice_For_Madhu #timetotalk

#JusticeForMadhu woke up to this. So disturbed and pained. When is this gonna stop. Why are we surrounded more more by these horrible creatures? Who is gonna stop them? Atleast for her soul to Rest in Peace, the culprit needs to be punished severely.

Print media and other news channels does not even considering it in Karnataka. But we want justice by punishing that…🤬🤬🤬Fellows #RIPMadhu 💐#JusticeForMadhu pic.twitter.com/G9jAXPAcSI

A girl of my age is raped,forced to write a fake suicide note and hung.She was just another Engg student like me. Today,our perverse politicians choose to keep mum coz they’re too busy shouting slogans. Raise your voice, fellow citizens.If not now, when?!?! #JusticeForMadhu pic.twitter.com/5gEWn9dnCf

Nothing much brutal can happen‼️‼️

LUST has become the most dangerous weapon against a woman⁉️⁉️#JusticeForMadhu pic.twitter.com/iy5xCuWj1v

Whom should we blame ??? Society ? Government ? Or God ??? Why there is no security for us ??? What kind of torture is this ? For the females …. @narendramodi @ANI please do something for the security of us also get this girl Justice #justiceformadhu pic.twitter.com/IL633ybGy0

Previous articleAriyalur Village People Attacked & Their Houses Damaged By PMK Goons !! Shocker !!
Next articleMahat Raghavendra Announced That He Got Engaged !! His Followers Trolling HIm By Posting Yashika’s Pictures !!

Senior journalist M Gunasekaran who was working in News 18 Channel, announced that he will be joining in Sun news on Friday. The channel...