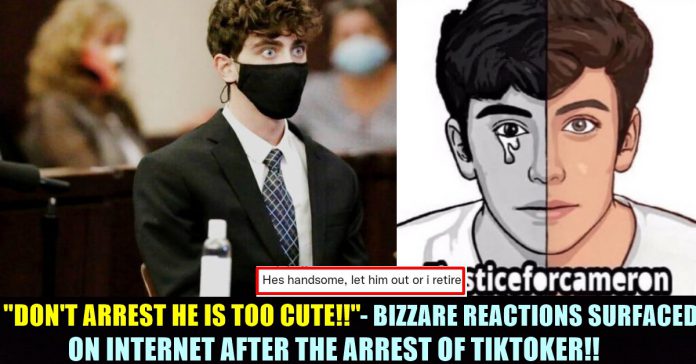 Cameron Herrin, a TikTok user, killed Jessica Raubenolt and her 20-month-old daughter Lillia in a car accident. Herrin has hit them with his Ford Mustang while racing against another vehicle in Tampa, Florida in 2018. He was sentenced to 24 years of imprisonment.

Social Media users have been rallying against this TikTok user being imprisoned. They have given the reason that he is too cute to be imprisoned. Many people started sharing posts and hashtags supporting Herrin. They have shared the posts with the caption, ‘Justice For Herrin’. However, there are debates whether the posts and tags were posted by real people. Social Media users claim that these are posted by real people and not paid for by the influencer.

Some of the people have been mocking these posts and hashtags.

Dynasty Wave has commented, “Pretty privilege is unbelievably real and people refuse to acknowledge it. The world was not built for unattractive people and they suffer every day because of it.”

Similar reactions and trolls are below:

“He’s too cute!”
The person: pic.twitter.com/PxdJFkyuWu

more context: most of the people protesting for his release and simping over him are tiktok users, there are a lot of fancams of him aswell as attempts at petitions and fundraisers to release him which weren’t successful but the amount of donations to the fundraiser hurts my soul

I have heard about him
He was racing with his friend but he ended up killing a mother and her child and everyone started simping on him and wants to free him
because he’s bloody hell cute
But nobody talked the poor father pic.twitter.com/wCqGmNdEaq

I really don’t want to believe humanity can go lower than this. But………. pic.twitter.com/aOsctgVyFU

Fun fact there is people simping for him on tiktok

Pretty privilege is unbelievably real and people refuse to acknowledge it. The world was not built for unattractive people and they suffer every day because of it.

Mugen Rao who won the title of Bigg Boss season 3 faced the biggest loss of his life today and along with the fans,...