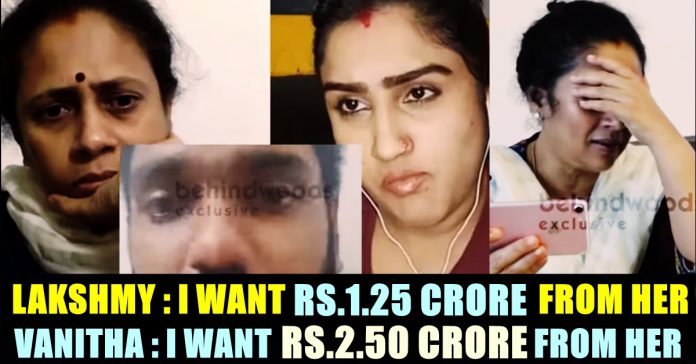 For involving in a video with Elizabeth Helen, wife of Peter Paul, Vanitha Vijayakumar abused actress and Director Lakshmy Ramakrishnan in an interaction that streamed in Behindwoods youtube channel. Lakshmy Ramakrishnan, a 49 year old supporting actress and filmmaker, is known for hosting a show named as “Solvathellam Unmai”. A video of herself interacting with Elizabeth Helen and hearing about her complaints against Vanitha Vijayakumar streamed in Behindwoods.

On seeing the video, Lakshmy said that the way Vanitha and Peter Paul behaved during their conversation is completely unacceptable and said that their behaviour is “Atrocious”. Vanitha Vijayakumar who got irked, appeared in a live interaction with Lakshmy and abused her directly. Both of them assassinated each other’s personal character.

The video went extremely viral whereas people in social media took sides and reacted to it in various ways. After more than a week, Lakshmi Ramakrishnan demanded Rs.1.25 crores as compensation from Vanitha for the defamation caused by her. The notice required an unconditional apology from Vanitha in writing for making “slanderous and defamatory” statements against Lakshmy through the show. It also asked Vanitha to desist from making any statements against Lakshmy ramakrishnan in future in any media platforms.

Here’s the legal notice sent by Lakshmy Ramakrishnan to Vanitha below :

Now, responding to this document, Vanitha , in her counter notice, demanded Rs. 2.5 crores from Lakshmy Ramakrishnan for spoiling her reputation. Vanitha’s lawyer, in the document stated that Vanitha denied all the allegations of Lakshmy Ramakrishnan against her. The document suggests that there was no marriage conducted between Peter Paul and Vanitha Vijayakumar and the actress never published the pictures officially in any kind of social media platform. Therefore, Sridhar said that Lakshmy cannot interfere in anything that is published in social media and conclude a statement against his client.

The document also said that Lakshmy Ramakrishnan is the first person to trigger the false information on social media against Vanitha without verifying the facts. “She had blindly made an open comment on social media tarnishing the image of my client in public life” the statement said. The document said that Lakshmy Ramakrishnan is not a guardian of society on Tamil culture. Sridhar also says that Vanitha denied the alleged collusion of her with Behindwoods youtube channel.

Here’s the picture of the document where Vanitha demanded Rs.2.5 crores from Lakshmy :

Check out the tweet of Vanitha Vijayakumar which contains the pictures of the entire document :

Lakshmy Ramakrishnan is expected to give a reply soon !!

Previous article“That Elephant Got Justice” People Spewing Hatred At Kerala
Next article“She Begged Me For Chance Once, Can You Identify Her?” -Joe Michael !!

Video Jockey Deepika, who was playing the role of Aishwarya in the famous Vijay TV soap Pandiyan Stores was replaced by another serial actress....