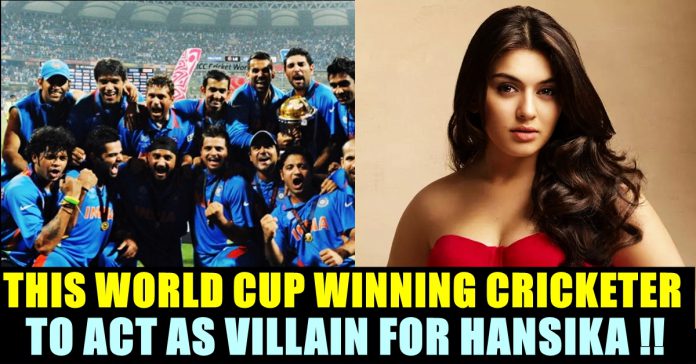 Cricketers acting in movies is something which is very rare compared to actors marrying cricketers. In previous occasions, cricketers such as Sadagopan Ramesh, Lakhman Sivaramakrishnan made it to the big screen but didn’t last long in the industry.

Now to our surprise, controversial fast bowler and one of the 15 members of India’s world cup winning squad Sreeshanth is going to make his Kollywood debut through an untitled movie of Hansika Motwani. The cricketer is going to do the antagonist role in the movie, according to reports.

The 36 year old who was banned to play cricket since his spot fixing scandal , tried to get into the team but failed to do so which made him enter the film career. The Kerala-born cricketer has already worked in four movies, including Aksar 2 (Hindi), Team 5 (Malayalam), Cabaret (Hindi) and Kempegowda 2 (Kannada). It is notable that the cricketer also took part in the Bigg Boss show of Hindi version.

The recent report says that Sreeshanth is going to feature in Tamil movie which is a horror-comedy alongside Hansika Motwani. As per a report in Times of India, the movie will be helmed by director duo Hari Shankar and Hareesh Narayan and will be produced by Ranganathan. They are known for their movie called Ambuli, which was the first stereoscopic 3D film in Kollywood. The movie will be a horror flick but not dark or gory in nature and the element of humour will be strong.

“Hansika loved her character graph and readily came on board. Hari-Hareesh and producer Ranganathan recently met Sreesanth for a script narration; his character has shades of grey. The film, which is set in Chennai, will go on floors in December, and will be a summer release,” reports said about the film. Hansika Motwani is currently shooting for her 50th film Maha which has STR in a cameo role.

As far as Sreeshanth’s ban is concerned, he, and the two other players accused of spot fixing had their Rajasthan Royals contracts suspended while their inquiries were pending. On 13 September 2013, Sreesanth and Ankeet Chavan were banned for life by BCCI’s disciplinary committee. However, the ban was reduced to seven years in August 2019.

What do you think on Sree making his Kollywood debut ?? Comment your views !!

Actor Siddharth who is known for raising voice against injustice that are taking place in the society through his official twitter handle, on Thursday,...

Actress Kasthuri who questioned about the USA visit of Superstar Rajinikanth during the ban on travel, uploaded a tweet on Tuesday, saying that she...