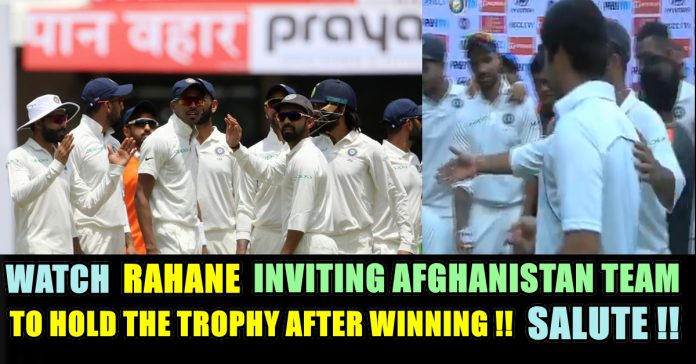 A disappointed outing for Afghanistan finally came to an end as India thumped the visitors by an innings and 262 runs. Afghanistan lost all of their 20 wickets in the final two sessions of Day 2. After a disastrous first inning (in which the visitors got bundled out for 109) Afghanistan were forced to follow-on. The second inning too started poorly for the visitors as Umesh Yadav tore up the top order. Exceptional pace-bowling display helped him bag three wickets at the top. Ishant too struck from the other end picking up Rahmat Shah (4). Post top order fall-out, Jadeja ripped apart Afghanistan’s middle clinching 4 wickets. Ishant later came back and to claim his second wicket in form of Yamin Ahmadzai. Ashwin ended Afghanistan’s second inning dismissing Wafadar for a duck. For Afghanistan, everything went wrong on Day 2. After batting collapse in the first innings, batsmen repeated the same mistakes. Only Hashmatullah Shahidi’s unbeaten 36 was the bright side for the team as no one else looked in any sort of comfort against Indian attack. 24 wickets (including 4 Indian wickets in the morning session) tumbled on the second day which is now the most wickets in a single day in Indian subcontinent. The match was also the shortest Test Match for India against any team they have ever played. Shikhar Dhawan was adjourned player of the match for his century in the first innings. In post match presentation while receiving the trophy , the Indian team captain Ajinkya Rahane invited the whole Afghanistan team to pose for the trophy picture. the trophy placed placed in between both the teams. This is most memorable moment for both the teams and very nice sportsmen spirit displayed by Team India. Watch the video below :

What a brilliant gesture from #TeamIndia to ask @ACBofficials players to pose with them with the Trophy. This has been more than just another Test match #SpiritofCricket #TheHistoricFirst #INDvAFG @Paytm pic.twitter.com/TxyEGVBOU8

Check out some of the main comments by the fans :

Wow what a gesture from rahane you beauty..incredible never happened before pic.twitter.com/fuak7aYoHz This shows relationship between India and Afghanistan…. Look us

Rahane is class.🙏🏻 The match was beyond a win or loss, specially the kinda history & friendship we share. The Indian crowd showed so much love to our team, home away from home.❤ Long live Afghanistan & India’s friendship. #HistoricTest #INDvAFG

This was really a treat to watch😻😻