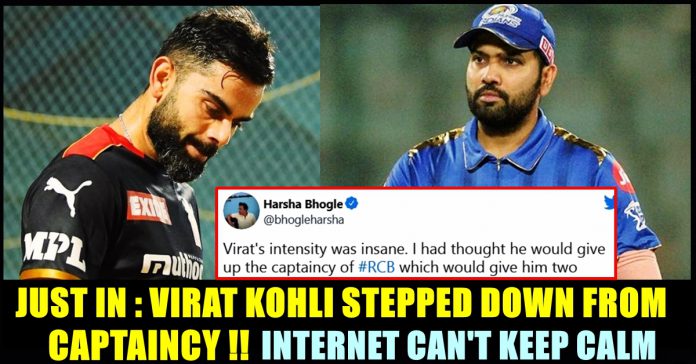 While we were thinking that it is the media and fans who are milking attention by buzzing about Virat stepping down from captaincy, the 32 year old released a press note on Thursday evening announcing about the same. The Delhi born cricketer who score 70 centuries in International cricket so far, announced that he will be stepping down from captaincy in T 20 cricket post the world cup tournament. The cricketer said that he needs to give space to himself as he was captaining the team for the past 5,6 years in all the three formats.

“I have been fortunate enough to not only represent India but also lead the Indian Cricket Team to my utmost capability. I thank everyone who has supported me in my journey as the Captain of the Indian Cricket Team. I couldn’t have done it without them – the boys, the support staff, the selection committee, my coaches and each and every Indian who prayed for us to win.” Virat Kohli started his press note.

“Understanding workload is a very important thing and considering my immense workload over the last 8-9 years playing all 3 formats and captaining regularly for last 5-6 years, I feel I need to give myself space to be fully ready to lead the Indian Team in Test and ODI Cricket. I have given everything to the Team during my time as T20 Captain and I will continue to do so for the T20 Team as a batsman moving forward.” he said in his statement.

“Of course, arriving at this decision took a lot of time. After a lot of contemplation and discussions with my close people, Ravi bhai and also Rohit, who have been an essential part of the leadership group, Ive
decided to step down as the T20 Captain after this T20 World Cup in Dubai in October. I have also spoken to the secretary Mr Jay Shah and the President of BCCI Mr Sourav Ganguly along with all the selectors about the same. I will continue to serve Indian Cricket and the Indian Team to the best of my ability.” the cricketer concluded.

This decision of the cricketer has grabbed headlines will thousands of fans , cricket experts and former cricketers reacting in various ways. Check out some of the reactions below :

Virat's intensity was insane. I had thought he would give up the captaincy of #RCB which would give him two months off as leader. Hopefully this can give his mind the rest it needs and who knows, find him another peak as a T20 batsman.

With Virat Kohli stepping down as the captain of T20, Rohit Sharma likely to lead India in the T20 World Cup 2022 in Australia.

Under Virat Kohli's leadership, India won T20i series in South Africa, England, New Zealand and Australia. He's the only Asian skipper to win T20i series in SENA countries. He also has winning percentage of more than 65.

#ViratKohli Steps Down From #captaincy In T20I's. This T20 World Cup Will Be His Last As Captain.

The way you have built and led this team of young guns since you took over as the Captain has been incredible!

You were and are my biggest inspiration Champ🥺💔

Previous articleFamous Celebrity Called Out This Regressive Dialogue From “Dikkilona” !!
Next articleBigg Boss Participation Of These Two Celebrities Confirmed 100 %