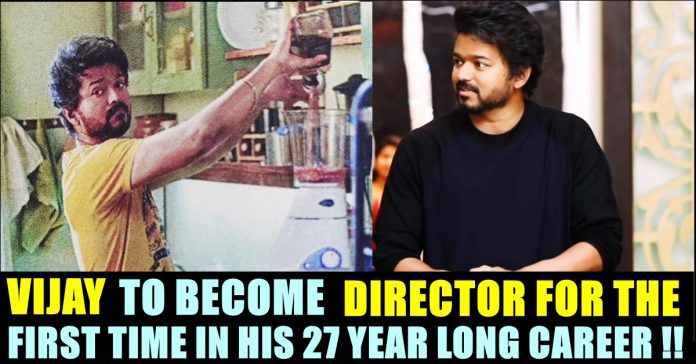 Actor Vijay who is known for his huge fan base in Tamil nadu, has reportedly directed a particular scene in “Master” and is all set to become director for the first time in his 27 long year career by the time of Master’s release. The team officially announced that the film is going to get released in theatres on 13 of January. “Master” is expected to bring back the audience to the theatres who are busy watching the newly released films in OTT platforms amidst the COVID 19 pandemic. Reports suggested that actor Vijay has personally requested chief minister Edappadi K Pazhaniswamy to allow 100% occupancy in the theatres of Tamil nadu.

“Aana aavanna apna time na Vanganna vanakkamna Ini #VaathiRaid na! #Vaathicoming to theatres near you on January 13.” said the producers of the movie to make the most awaited release announcement.

Meanwhile, director Lokesh Kanagaraj, as a part of the film’s promotion, has provided an interview to Vikatan magazine. During the interaction, the filmmaker has revealed about an interesting incident where actor Vijay directed a particular scene in the film. The news is doing rounds in social media platforms with the fans of the actor going gaga over it.

The much awaited teaser of “Master” released on youtube only make the fans to crave for the film. The 91 seconds long teaser promises a mass commercial action entertainer with a cat and mouse chase between Thalapathy Vijay nd Makkal Selvan Vijay Sethupathi. Starting the teaser by revealing the character name of Vijay, the teaser goes on to expose the roles of Malavika Mohanan, Shanthanu, Arjun Das, Gouri Kishan and others.

In the interaction, Lokesh revealed that Vijay asked him to act in a scene in the film as he is torturing the artists as a director. “I thought he would forget it. On the final day of shoot, he remembered it and asked me to act in a scene. To escape from his demand, I asked him to direct the scene I am going to act. But he accepted and I acted in the scene. Vijay sir said “action” and “cut” for the scene I acted.” Lokesh said. An earlier report said that Vijay even decided camera angles for that scene and taught acting for the artists who were involved in it.

Lokesh also confirmed that the trailer of the film be released soon and it will feature dialogues unlike teaser. Meanwhile, The exclusive pictures that took place in the Vikatan magazine are being widely spread in social media platforms.

Director Lokesh confirmed that #MasterTrailer will be released very soon. He also said that Thalapathy Vijay’s dialogues are added in the most awaited trailer in a interview with Ananda Vikatan. #Master @actorvijay @Dir_Lokesh @Master2021Film pic.twitter.com/C5YoZz2anM

As far as the next project of Vijay is concerned, Vijay is committed with Sun pictures. The film which is tentatively titled as “Thalapathy 65” is going to be directed by Neson Dileepkumar of “Kolamaavu Kokila” fame. The film is going to have Anirudh as music director and the announcement video was released in youtube recently.

Bigg Boss contestant Janany's comment on her co-contestant and senior Television actress Rachitha didn't go well among the viewers of the show. The Sri...

“Many Celebrities Wished Me Personally” – Mohan G’s Emotional Reply To A Fan !!

Mohan G, trailer of whose film released recently, replied to a fan in the micro blogging social media site who appreciated him after watching...