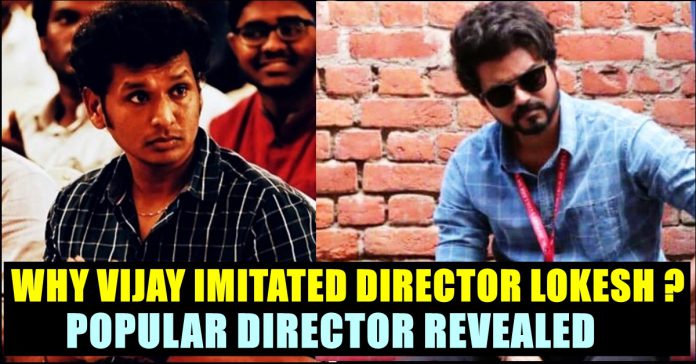 Actor Vijay is one of the very few actors who has huge fan following in South India. Having acted in more than 60+ films, he is in the top race to become the highest paid actor in Kollywood. As he is currently working for Thalapathy 64 in Delhi, reports suggested that the actor is going to role of a college lecturer according to Indiaglitz.

Meanwhile, director Rathnakumar who is working as additional screenplay writer in Thalapathy 64, is a dear friend of Lokesh Kanagaraj. The filmmaker who is celebrating his birthday today, is known for directing films like Meyadha Maan and Aadai. Above all, Rathnakumar is an ardent fan of actor Vijay which is evident through his social media posts.

Now the filmmaker has posted tweet regarding how he received his birthday wishes from his idol. According to his tweet, Vijay has mimicked like director Lokesh through his phone to wish Rathna on his birthday. In his tweet Rathnakumar wrote “Due to Travelling, meeting people & scripting couldn’t be in Delhi today. And this happened. “Machi Happy birthday da”. This is how Thalapathy
@actorvijay mimicked like @Dir_Lokesh calling from his mobile wishing me on my birthday.❤️🤗. Life is Worthuuuu Living 😊. Thank you all”

Due to Travelling, meeting people & scripting couldn't be in Delhi today. And this happened. "Machi Happy birthday da". This is how Thalapathy @actorvijay mimicked like @Dir_Lokesh calling from his mobile wishing me on my birthday.❤️🤗. Life is Worthuuuu Living 😊. Thank you all

We have heard about many such incidents of actor Vijay where he would surprise his co-stars with his humble attitude. Recently Amritha Aiyer opened on how Vijay surprised her on her birthday on the sets of “Bigil”

As far as Thalapathy 64 is concerned, The film is going to talk about the flaws in educational system and the death of NEET aspirat Anitha is also going to take place in the film according to sources.

According to recent reports, the yet to be titled film of actor Vijay is a official remake of Kamal Haasan’s cult classic film “Nammavar” in which Kamal played the role of a professor who tries to reform a spoiled brat. According to Valaipechu, actor Vijay felt the story Lokesh Kanagaraj narrated is similar to Kamal’s “Nammavar”. To avoid the consequences in future, Vijay asked Lokesh to buy the remake rights from Kamal Haasan who owns the story of “Nammavar”.

Produced by XB film creators, the film has musician Anirudh as composer and Vijay Sethupathi is going to do the role of main antagonist. The film also has an ensemble casting which is raising the expectation level of his fans.

Previous articleVadivelu Made The Entire Stadium To Erupt In Laughter !! WATCH VIDEO !!
Next articleNayanthara’s Sacrifice For Her Next Film !! RJ Balaji Reveals !!

Raiza’s Fitting Reply To An Inappropriate Comment Of A Follower !!

Raiza wilson who rose to fame among Tamil audience through her stint in Bigg Boss season one, is currently busy engaging the followers of...

After facing Income tax Raids, actress Tapsee Pannu came up with a series of tweets trolling the government for the three days of an...