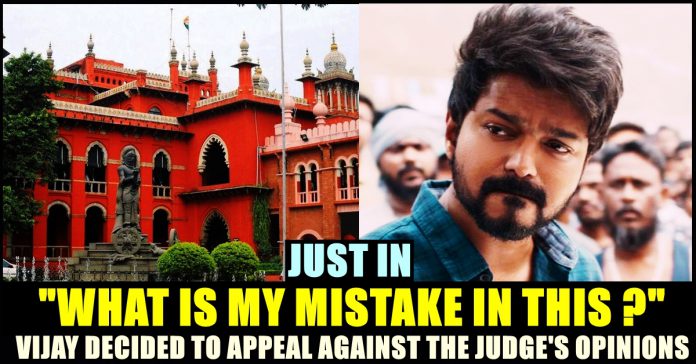 S. Kumaresan, lawyer of actor Vijay said to Vikatan that they are going to appeal against the personal opinions made by Judge S.M Subramaniyam of Madras High court while issuing judgement for a petition filed by the actor in the year 2012, seeking entry tax exemption for his imported car, Rolls Royce Ghost. “The appeal is not to deny paying the entry tax or to pay the fine amount but to express the objection over the opinions made by the judge of Madras High Court” said the Lawyer of actor Vijay.

“In 1999, one William Fernandas filed a case in Kerala High court based on Entry tax in state Kerala. He argued that it is not fair to ask Entry tax after making people to pay a huge sum of amount as tax for customs duty. The court issued a judgement saying that buyers are paying tax for customs duty while importing products from foreign countries and concluded that Entry tax shouldn’t be collected from them.” Vijay’s Lawyer said while talking to Vikatan.

“When TVS electronics filed a case based on Entry tax in the same year at Madras High Court, it referred to the case of William Fernandas and concluded that no entry tax should be collected while importing products from foreign countries. Government didn’t accept the judgement and appealed at Supreme court. In the meantime, the government forced people to pay entry tax, showing the progress of the case that was taking place at the Supreme court. That’s where the problem started” Kumaresan said, according to the report.

“Due to this contradictions between High court and Government, not only people who bought car, every individual who were asked to pay Entry tax left dejected. Hundreds of people started marching towards court to find a solution and Vijay sir’s case is one such” S. Kumaresan said. “Judge Janarthana Raja who heard the case of Vijay sir in the year 2012, issued conditional stay order for the Entry tax and said that the vehicle could be registered by paying 20% of entry tax.” he added.

“Vijay sir who already paid Rs. 1,88,11,045 as customs duty, along with other taxes, paid 20% entry tax based on the conditional stay order and registered the vehicle on 23.0.2012. At this situation, the judgement for the case filed at Supreme court arrived in the year 2017, cancelling the judgements of Kerala High Court and Chennai High Court. Supreme court said that entry tax must be paid for imported products and every case that were filed against it, started receiving the same judgement.” Kumaresan said.

“Our case came for hearing on 8.7.2021. We were ready to pay the entry tax as per the judgement of Supreme court but Judge opined in a way that it is a punishable crime to even file a case like that. People who aren’t fully aware of the case, criticizing Vijay based on judge’s statements” the Lawyer said according to Vikatan.

“We never intended to evade paying tax. The case was filed due to the contradiction between court’s judgement and government’s approach. Vijay sir would have been paid the entry tax without objection if the rule was firm at that time. Vijay sir know that one couldn’t escape paying tax using his/her influence. But judge has made objectionable opinions. We have decided to appeal against the objectionable opinions of the judge. We are going to file the petition at Chennai High Court as it is a judgement of an individual judge” he said.

“The appeal is not to deny paying tax or fine. We are only filing it against the objectionable opinions. We feel that he shouldn’t have used such harsh words that hurt our emotions. We will face it legally” the lawyer added. When the lawyer was asked why Vijay’s occupation was not mentioned in the petition, he said that the actor didn’t want it to get portrayed as if an actor like him is using his influence to escape paying tax. “Apart from that, Vijay wanted to file the case as an ordinary citizen of this country” Vijay’s Lawyer Kumaresan said.

Mysskin Replied To The Meme Creators Who Made Fun Of Him !!

Responding to the memes and trolls that surfaced making fun of him for stating that he watched Japanese classic movie "Seven Samurai" thousand times...