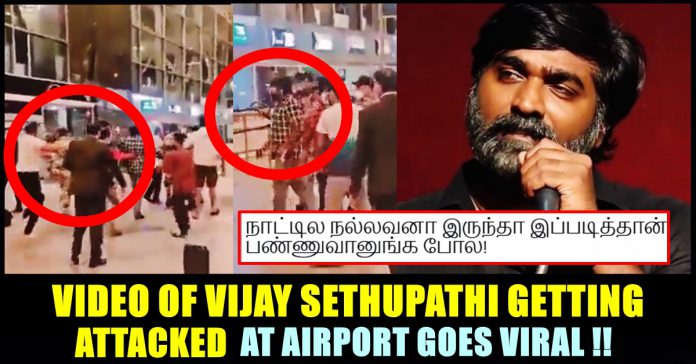 A shocking video of actor Vijay Sethupathi getting attacked while being escorted by securities going viral across the social media platforms. The video shows a person kicking the actor while he was being accompanied by the securities in an airport-like place. The 6 second clip is trending with fans reacting in various ways. With a number of users expressing their dejection over the actor getting attacked, few questioned whether it is a shooting spot and whether any of the scenes of his upcoming film is being shot.

Irrespective of the character and his image, Vijay Sethupathi is pretty much busy acting in many films. He did a cameo in “Oh My Kadavule” as a “God” and has accepted to do special appearances in films like “Pisasu 2”, “Michael”, “Viduthalai”, “Mumbaikaar” etc. He acted as a villain for Madhavan in “Vikram Vedha”, for Rajinikanth in “Petta”, for Vijay in “Master”. The actor is also roped in to act as villain for Kamal Haasan in “Vikram” which is being made under Rajkamal films International. It is also notable that Vijay is currently concentrating in other languages such as Telugu, Hindi etc.

In a span of 10 years, Vijay Sethupathi has gained a separate fan base for himself. He also got himself involved in a number of controversies. When the actor decided to play Sri lankan cricketer Muttiah Muralidharan in his biographical picture, a huge controversy took place among the Tamil speaking audience. Many who believed that Muttiah Muralidharan supported Srilankan government regarding the “Eezham” attack, demanded Vijay Sethupathi not to act in the film.

As a result of the severe outrage that emerged against him, Vijay decided not to act in the film. Due to his public speeches where he asks people to believe in fellow humans instead of believing in a superior power, he started receiving hatred from a set of people. Now, a video of the actor getting attacked in Bengaluru airport goes viral. Reports suggests that the person who attacked the actor made fun of him earlier and kicked him when the actor decided to leave with security.

“They do this to good people it seems” an online user said after watching the video. “Wtf is this ? What action taken against this person ?” another one asked.

Actor #VijaySethupathi attacked in Bengaluru Airport. Wtf is this ? What action taken against this person ? pic.twitter.com/4K7weNhoFl

Who attacked him that person should be Punished pic.twitter.com/Nio2M3ok1c

Actor #VijaySethupathi attacked in Bengaluru Airport, the actor is safe.

We strongly registering the protest against the activity….pic.twitter.com/0Ge740hzkP

A hashtag saying "Boycott Amazon" is trending in Internet with nearly 10,000 tweets from the users of Twitter. The prominent reason behind the hashtag...

A 45-year-old woman has been arrested for allegedly molesting her friend’s son, a 11-year-old- boy. She was arrested by the cops from Bandra (West). According...