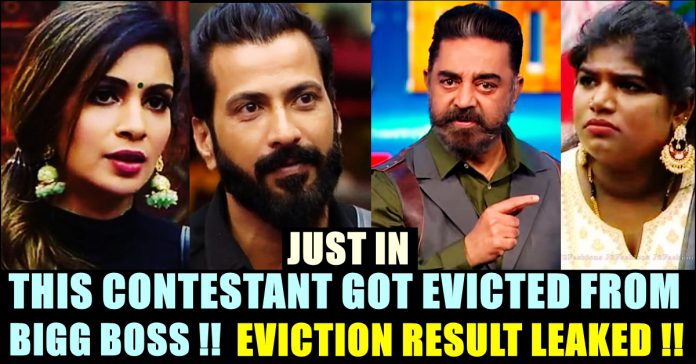 The shooting of Bigg Boss season 4’s weekend episodes got completed and unofficial sources have started leaking the details of eviction for this week. It has been reported that Kamal Haasan had covered almost all the issues that took place inside the Bigg Boss during the weekdays. The first promo that got released today, showed Kamal Haasan addressing about the Hero, Villain issue between Aari and Balaji. He also questioned whether the term”Anbu” (Love) is being used inside the house as a weapon.

The second promo showed Aari Arjunan and Balaji Murugadoss raising complaints against each other in front of Kamal Haasan. At one point, Kamal asks Balaji to hold on, adding that he will come to that topic later.

Sources had revealed that Kamal raised question to Nisha regarding her favouritism towards Rio. He also criticized the way contestants voted the boring performer of the week. The “Dhasavatharam” actor said that it looked like choosing a contestant to evict, according to reports. During the end of Saturday’s episode, Kamal Haasan had saved Aari and Bala together, reports suggests.

Now, regarding the eviction, it has been reported that Samyuktha got evicted from the show due to the less votes she received from the audience. Unlike other nominations, Samyuktha got nominated by Anitha Sampath. the first ever contestant in the Bigg Boss history to win the topple card.

Samyuktha came under scanner ever since she became the captain of the house with Balaji Murugadoss’s help. The less number of footage she occupied in the past week and the way she indirectly criticized the upbringing of Aari Arjunan could have caused her eviction.

“Her strategy is to stay safe till the finals without getting nominated. When it comes to open tasks, she would accuse the weaker contestants to play a safe game. She also behaves rude at times” said Anitha while nominate Samyuktha. Bigg Boss announced that Samyuktha is getting nominated instead of Anitha as a result of which the actress and model got evicted.

Watch the video of Samyuktha getting nominated :

Check out some of the reactions for Samyuktha’s eviction below :

#Anitha should be appreciated for using the topple card for #Sam.Thats a masterstroke.
If #Sam evicted, Balamana adi for so called posh gang. Balaji was so confident that they are right and saying Sanam will leave. Even #Sam said in unseen I may not go dis week.#BiggBossTamil4

If Sombu #samyuktha is evicted this week.. viewers celebrations will be like..