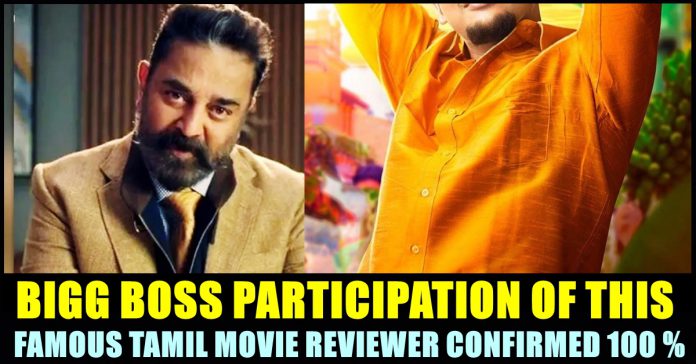 Followed by the several names that are doing rounds among the Internet users regarding the 15 celebrity contestants of the upcoming BIGG BOSS reality game show, reports on movie reviewer Abishek Raaja getting into the house has been surfaced. The news came in as a shock to the fans of Bigg Boss show and online users as Abishek is pretty much famous for his impulsive behaviour. He who interviewed almost all the top celebrities of Kollywood, has a separate fan following for the way he reviews movies. He also acted in a film named “Imaikaa Nodigal” as a best friend of Raashi Khanna.

It has been officially announced that season 5 of Tamil Bigg Boss is going to be launched from 3rd of October and fans of the show are eagerly waiting to witness the 15 celebrity contestants which will be revealed only on the inaugural. However, speculations are doing rounds in Internet constantly with many reacting on how the show would be if their favourite celebrity enters the house as a contestant.

Participations of Vijay TV Priyanka, “Imman” Annachi, Shakeela’s daughter Mila has been confirmed almost. However, fans can’t keep calm on knowing about the details of all the contestants. On Sunday, popular movie reviewer Prashanth aka “It is Prashanth” came up with a tweet saying that Abishek Raaja is going to participate in the show. “BiggBossTamil5 -@cinemapayyan one of the participants.” his tweet read.

#BiggBossTamil5 – @cinemapayyan one of the participants.

Though the authenticity of the tweet is unknown, fans started reacting on how it would be if Abishek Raaja takes part in the show as a contestant. With immense passion for cinema, Abishek has been reviewing movies for years. His 2 minute reviews in “Fully Filmy” is pretty much famous and he grabbed the limelight after roasting Raghava Lawrence’s “Motta Siva Ketta Siva” film. He is currently reviewing movies in his own youtube channel “Open Panna” where he also interviews celebrities. He is actively analysing the movies of Kollywood through his youtube channel and has been giving updates about the same industry through his official twitter handle.

He deleted that tweet… But eventhough, here is the SS pic.twitter.com/cez6ZlnVzL

Till last night, Abishek has been actively giving updates and posting tweets through his twitter handle and hasn’t reacted to the tweet of Prashanth. Check out some of the reactions for Abishek’s participation in the show :

i cant believe cinema payyan is gna go to bb like wtf is he gna do inside man review ppl??? pls kamal will be like “abhishek ur eliminated” he will be like ayyo thalaiva goosebumps thalaiva sonic radiation adhu idhu 💀

Comment your views on Abishek participating in the show as one of the contestants !!

Mohammad Amir, former Pakistan player who got banned by International cricket council for involving in spot fixing, uploaded a tweet in his official twitter...

The Tamil Film Producers Council on Monday informed the exhibitors of Vijay starrer Sarkar that a portal that “hosts pirated versions” of films has...

Arya Finally Opened On The Mental Trauma He Went Through Due To The Cheating Case !!

Actor Arya who is currently basking the success of his "Sarpatta Parambarai", had a sigh of relief after Chennai Police arrested the culprits who...