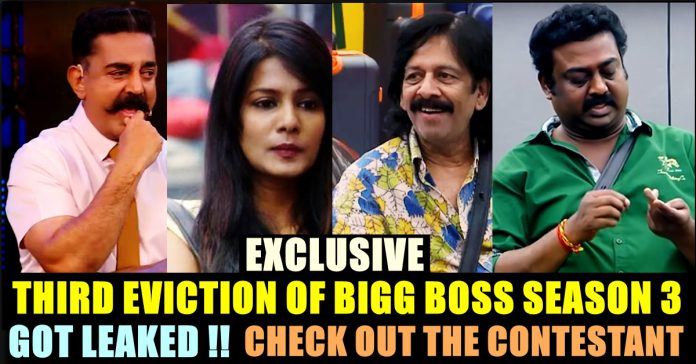 The Saturday’s episode of Bigg Boss Tamil has the ever charming Kamal Haasan in a cool attire. The 63 year old “Indian” actor, seems to be observed the show very keenly amidst his busy schedule. It is notable that his production venture “Kadaaram Kondaan” which has Vikram in the lead role got released on Thursday.

For the first time in this third season, “Kurumpadam” has been played by Bigg Boss which was requested by the contestants themselves. To identify who initiated the meeting in Meera Mithun’s task issue, “Kurumpadam” was played and it was revealed that Captain Sakshi is the one who uttered the word “Meeting”, in the first place. Except Reshma, every contestant and Kamal Haasan accepted it.

After that Kamal also inquired about the triangular love story of Kavin who requested Kamal Haasan to spare him before he started discussing the matter. However, the conversation led Sakshi to break down while she was interacting with kamal Haasan. She said that Kavin talked about something which is beyond friendship and later said that it is just for fun. Kamal reiterated her statement and asked Kavin not to play with people’s emotion.

After that Kamal Haasan said to people that there is a limit in intervening in issues  like these. “If we asked anything more than this, it is disturbing their privacy. Now it depends on them.” the actor said.

Now the third eliminated contestant from the Bigg Boss house has been revealed by several media houses. According to those who watched the show on live, Mohan Vaidhya is the one who got eliminated due to garnering less votes from the fans of Bigg Boss. Followed by two female contestants such as Fathima Babu and Vanitha Vijayakumar, Mohan Vaithya is the first male contestant to get evicted.

The main reason behind his eviction will most probably be his way of approaching the young girls inside the house. He always insisted girls like Abhirami and Sakshi to kiss him after an issue. Initially it looked normal but people who witnessed it very often got extremely irritated which resulted in online trolls against him.

One humble request to media outlets – Please don’t gang up and interview Mohan Vaidhya after he’s evicted this week.. we can’t take any more of him. I hope KH also gets him off stage quickly. #biggbosstamil #biggbosstamil3

But already people are complaining that Bigg Boss house is boring without the presence of Vanitha Vijayakumar. Ain’t they miss Mohan very badly after his eviction ??