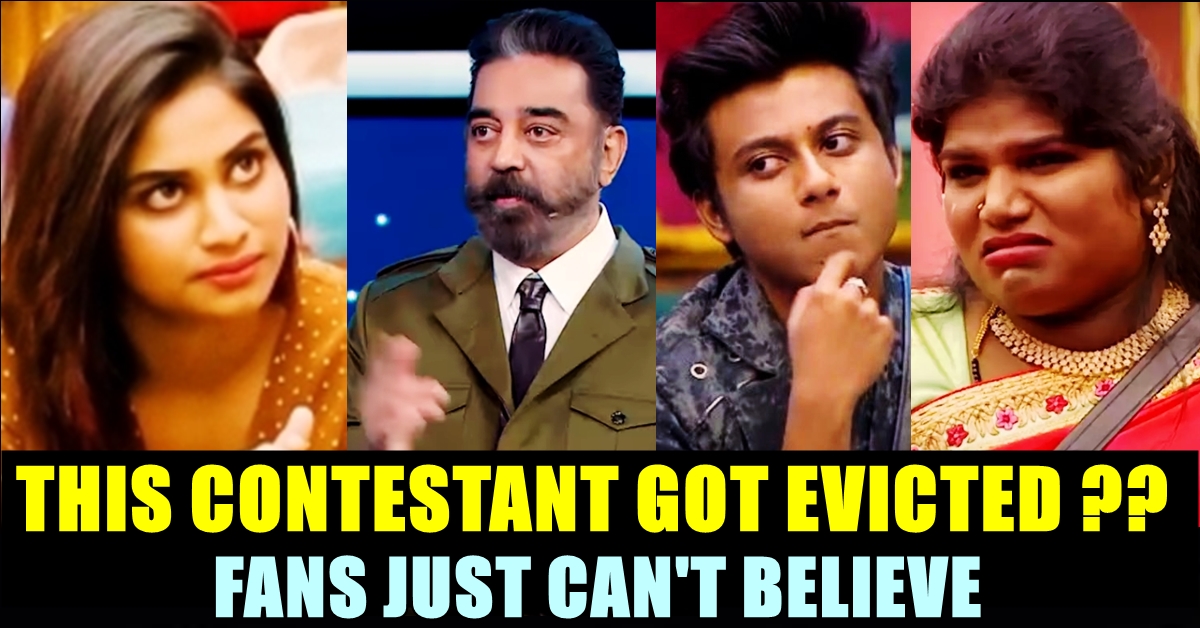 A strong rumour is doing rounds regarding the eviction of this week’s Bigg Boss show. Various sources of media portals have been updating that Sanam Shetty who was widely believed to enter the finals of the show, got deleted. However, fans of the model couldn’t believe the update and uploading posts against the channel management and Bigg Boss show organisers. Aari Arjunan, Ramya Pandiyan, Aajeedh, Shivani Narayanan, Sanam shetty, Aranthangi Nisha and Anitha sampath were the nominated contestants of the week. Nisha, Aajeedh or Shiva were the expected contestants to get eliminated. This news on sanam’s eviction came in as a shock to the Bigg Boss followers.

The first promo of Saturday’s episode showed Kamal Haasan saying that contestants of Bigg Boss show are not understanding the core theme of the show. He also condemned those who are not respecting others and constantly behaving contradictory.

In the second promo, Kamal Haasan directly slammed the contestants for team up with each other while contesting against each other. He called out Balaji, Anitha, Nisha, Ramesh, Gabi and Som shekar for giving up in their tasks.

Check out the second promo below :

Now, according to the report updated by Behindwoods, it is believed that Sanam shetty got evicted from the show for the less number of votes she received. Sanam was lauded by Kamal Haasan last week for her competitive mindset and always raised voice for justice during the problems that are taking place inside the Bigg Boss house.

Sanam shetty is a model by profession and she is one of the very few contestants inside the Bigg Boss house who didn’t enroll herself to the groups. After knowing about this update, fans who are keenly watching the show, has been expressing their disappointment.

Many said that they won’t follow the show if Sanam gets evicted from the it. Check out some of the reactions in social media for the update on sanam’s eviction :

Whether #Sanam wins the title or not is secondary issue for me. She deserves to be on stage as one of the finalists! Not to be evicted halfway when others doing nothing but eating and wasting time are still in! #BiggBossTamil4 #BBTamilSeason4 #BiggBossTamil #SanamShetty #Sanam

Not a fan of #Sanam,but she will get evicted then we can’t expect anything except worst decision from @vijaytelevision mixtures are inside &the one who played individually & gave her 100% in every tasks going out👎worst season ever#BiggBossTamil4 #BiggBossTamil #BiggBoss4Tamil

If the reports are true that #Sanamshetty is evicted, #BiggBossTamil is a joke. What have #Nisha #Shivani #Ajeedh done better than her individually? Absolutely nothing. Ridiculous. #BiggBossTamil4 @vijaytelevision #sanam

This statement from #Anitha is shows these stupid viewers mindset. sanam deserves to stay #BiggBossTamil4 pic.twitter.com/8oJTnVsB86

Repeat after me: I will stop watching #BiggBossTamil if deserving contestant #Sanam is evicted! #BiggBossTamil4 #SanamShetty https://t.co/UeniIeoTve

So, the rumour is #my girl is getting evicted this week. I watched this crap show tolerating bodysoda, his servant and other irritating idiots only because of #sanam. If she is not there, Vijay tv along with all other contestants can go to hell.#BiggBossTamil4

Without #sanam BB4 is just a mega serial of love bed. #Sanam most deserving contestant . I hope she won’t get evicted. #Sanam playing her game genuinely from day 1 #sanam didn’t back stabbed any one, she never try to hurt anyone especially she stand for herself no matter what.

I will fucking lose it if #sanam is evicted….totally unfair…#BiggBossTamil4

However, we have wait till the telecast of the show to confirm if Sanam really got evicted. Comment your views on this report and the reactions it is receiving !!