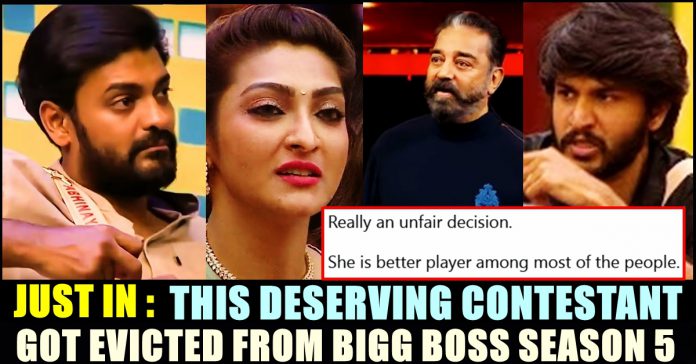 As usual, eviction result of this week’s Bigg Boss show got leaked and left fans in a shocked state as one of the strong contestants got eliminated from the show due to the less number of votes she received. Reactions questioning the stay of many other contestants who do “nothing” inside the house are flooding the Internet platforms. Viewers could be seen stating that the eliminated contestant is a potential finalist and a “go getter”. So far, the show has saw four eliminations and one walk out.

First promo of Saturday shows Kamal Haasan confirming the elimination of this week, despite the “Diwali” festival. “Many of you viewers think that this is “Diwali” season and there will be an offer in “eviction”. There is “offers” for festival and there is “expense” as well” Ulaganayan says.

In the second promo, Kamal could be seen bringing the issue that took place between Pavni and Thamarai to the discussion and ends up letting them argue with each other once again. The promo ends with Kamal trying to get attention of them who are busy arguing.

Third promo shows Kamal asking Priyanka and Niroop to tell the name of the contestants who could get eliminated.

Now, as far as the eviction is concerned, Abhinay, Iykki, Mathumitha, Ciby, Suruthi, Pavni, Isaivani, Akshara and Niroop were nominated for the eviction. It has been revealed that Suruthi who is a model by profession, got evicted from the show. Suruthi won hearts of Bigg Boss viewers after opening her heart out in the task where contestants were asked to tell about their story to get votes from their co-contestants. She who found it hard to talk about her personal life initially, managed to tell her con-contestants and the millions of Bigg Boss viewers about her past.

After having a dark past, Suruthi who managed to gain a separate place for her in the modelling industry, also displayed a competitive game spirit during her Bigg Boss stin. She got appreciated by Kamal Haasan last week for the way she tried to steal coin from Thamarai Selvi. He wanted her to involve in the game more but unfortunately got evicted.

Check out some of the reactions that surfaced for Suruthi’s eviction :

She should have been one of finalists. She deserves.

But it's really unfair to evict Surudhi when all mixtures still inside. #SurvivorTamil

Seriously! Dang it .. potential winner ya ! Worst fellows … please from next don’t bring any soo called highly influential celebrities inside ! This is sooo stupid decision .

Okay one more person who played or wanted to play got eliminated! Good work peeps. Keep the mixtures in house.

Thamarai, the winner of this season. This is like who are going against her are getting evicted. Namitha, was shown red card and now shruthi. Next will be pavni. Now the rest of the housemates will be doing full jaldra to thamarai. 🤦‍♀️

She is better player among most of the people.

I don't understand what abhinay, Iyakki did than this girl ? #biggbosstamil5

Comment your views on Suruthi getting evicted from the show !!

Based on a statement made by actor Shaam in one of his recent interviews to a private YouTube Channel, users of Tamil twitter community...

Fans Got Upset On Seeing Ilayaraja Being Mentioned As “Dalit”!!

Fans of music maestro Ilayaraja got upset after seeing the notice of central government in which the Tamil musician was mentioned as "Dalit". On...