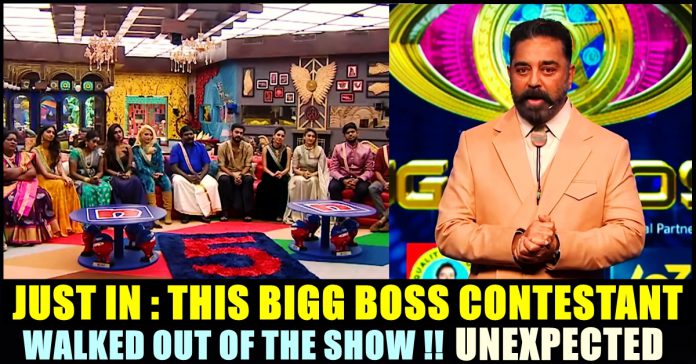 In an unexpected turn of events, Bigg Boss contestant Namitha Marimuthu walked out of the Kamal Haasan hosting show, emerged reports. Though the reason is unknown, news on the same is going viral among the users of social media platforms. Namitha Marimuthu won hearts through the way she narrated her own life story in the first task provided by Bigg Boss.

Having Ulaganaayagan Kamal Haasan as host for one more time, season 5 of Bigg Boss show started streaming from 6 PM of Sunday. Showing the newly renovated house, Kamal addressed the audience who were appeared in person this time in the auditorium, unlike the two previous seasons. He , introduced the participants one by one by asking them tell about their profession, personal interests etc. In the inaugural episode which streamed for 6 plus hours, singing and dancing performances of the participants were also took place to entertain the audience, along with the contestants giving self introductions.

Rap singer Iykki Berry, Thamarai Selvi, a folk singer, Ciby of “Master” fame and Niroop who identifies himself as Entrepreneur and aspiring model entered the Bigg Boss house next. First week went past by a number of contestants narrating about the way they struggled in their life. Now, as two promos of the weekend episode has been released, a news on Namitha Marimuthu walking out of the show has been leaked.

Namitha Marithu, during her narration, walked audience through the hardship she went through as a transgender. Despite of all the odds, she managed to become a prominent model and requested parents to provide education to their LGBTQ children. Her speech won hearts with her co-contestants providing hearts. Now, to our shock, reports emerged saying that she walked out of the show in her own will.

“Due to unavoidable reasons, Namitha walked out of the Bigg Boss house in her own will” Bigg Boss reportedly said.

However, Joe Michael, Franchise Owner Of Miss Tamilnadu And Mrs Tamilnadu, came up with a tweet saying that Namitha will be back inside the Bigg Boss house to play the game.

#NamithaMarimuthu Will Be back to BB House !!!

Previous articleFans Criticizing Rajinikanth- Nayanthara Pair For This Reason !!
Next articleSiddharth Finally Opened On The Cryptic Tweet He Posted After Samantha’s Divorce !!

Mysskin Replied To The Meme Creators Who Made Fun Of Him !!

Responding to the memes and trolls that surfaced making fun of him for stating that he watched Japanese classic movie "Seven Samurai" thousand times...