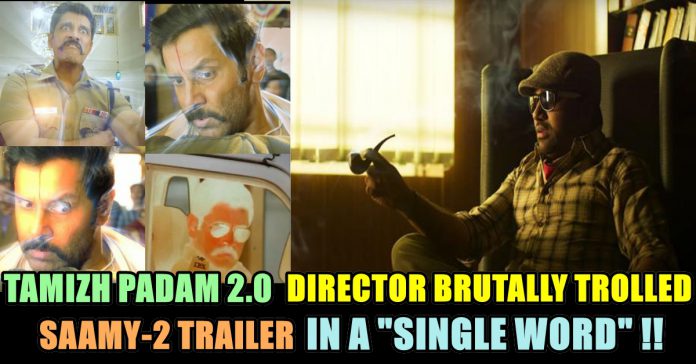 Now today the trailer of Director Hari’s Saamy-2 released and it had all the eligibility to become a scapegoat for the Tamizh Padam crew. The Sequel of Saamy, a blockbuster movie back in 2003 which starred Vikram, Trisha is very well known for its  engaging screenplay. But the dialogues which took place in Saamy-2 trailer is an absolute laughter and nowhere near to the dialogues of part-1. watch the trailer here:

Now C.S Amuthan, the director of Tamizh Padam series watched the trailer and trolled it in a single word. Check his tweet below :

He said thanks and posted the link of Saamy-2 Trailer. For this fans continuously keeps reacting, check some of them here:

To make services top-notch, Indian Railways is equipping its trains and stations with world-class facilities but it's saddening to see the transporter's struggle with...

Many Cricketing Legends Lauded Virat For His Special Knock But This One Tops All !!

Virat Kohli slammed his 25th Test century and his seventh against Australia on Sunday to help India cross the 200-run mark on Day 3...

Raiza Replied To A Guy To Compared Her Face With Corona !!

Raiza spending most of her quarantine time with her social media followers. Being a fashion model, the "Pyaar Prema Kaadhal" actress never missed to...

Flipkart Delivery Boy From Chennai Earned 5 Lakhs In A Smart Way And The Company Didn’t Even Realize It!

Most of you these days like to purchase your favorite phone online, isn’t it? But what if you login to a very trustworthy and...