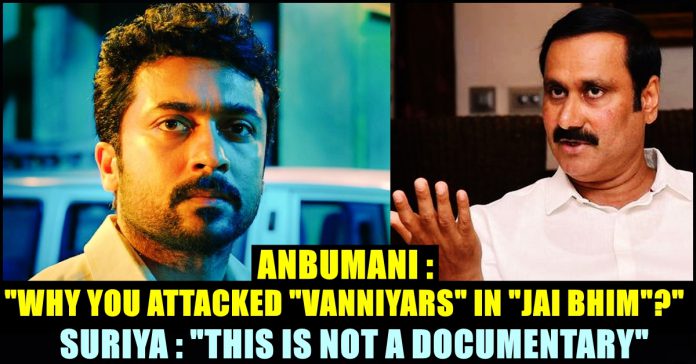 Suriya replied to the questions of Anbumani Ramdoss based on the former’s recently released “Jai bhim”. The PMK leader, through his long press note, shot 9 questions to Suriya and asked him to answer if his intentions were true. Suriya, immediately replied to him through a long note.

Anbumani Ramadoss, in his press release, asked Suriya whether the film was made based on a true incident. He questioned why the character of the police name was kept as “Gurumoorthi” instead of the real life inspector’s name which is “Antony Saamy”.

“Through the interviews of Parvathi Ammal, we could understand that people who belong to the village, who are mostly “Vanniyars”, helped her during the case. Why you didn’t show it that way?” asked Ramadoss in a way of accusing Suriya of targeting people who belong to Vanniyar community.

Ramdoss also asked Suriya about the calendar scene which denoted that the corrupt police officer belong to “Vanniyar” community. The politician said that there are two category of film makers. “One will speak the truth and help the victims to get justice and the other will create controversy and earn money by advertising their product. Which category you belong to?” Anbumani asked.

Read the 9 questions of Anbumani Ramdoss below :

Further, Ramdoss asked what Suriya understood as Ambedkar’s ideology and questioned the actor whether he is aware about PMK’s achievements in the past 42 years. Check out the press not released by the politician. Here’s his tweet :

Immediately replying to him, Suriya came up with a press note thanking Anbumani for the love he has for his family. Explaining the one line of the film, Suriya said that the film crew of “Jai bhim” tried to talk about the hardship of tribal people. The actor pointed out how the film crew changed the calendar picture after it was subjected to a controversy.

“A film is not a documentary” said Suriya and mentioned about the card that was added during the beginning of the film which says that the film doesn’t denote anyone personally. “I accept your statement on “creative freedom shouldn’t target a particular community” but I also believe that you will accept my ideology on “creative freedom shouldn’t be subjected to threatening” Suriya said and requested Ramadoss not to politicize the issue discussed by “Jai bhim” by restricting it into a “namesake politics”

“The character name you are mentioning also denotes another different person, says a journalist. Keeping any name to a negative character will target someone and there is no end for it. The voice we raised against injustice is being distracted by the namesake politics” Suriya worried.

Politely denying the accusations of Ramdoss, Suriya said that he has support across the country and is working towards improving the lifestyle of fellow humans. “Let’s work towards increasing the brotherhood and equality in our respective ways. Thanks for the understanding” Suriya’s press note read.

Here’s the reply note of the actor :

Abhirami Venkatachalam has a separate fan base in Instagram where there are so many Instagram accounts which only runs to support her. Not only...