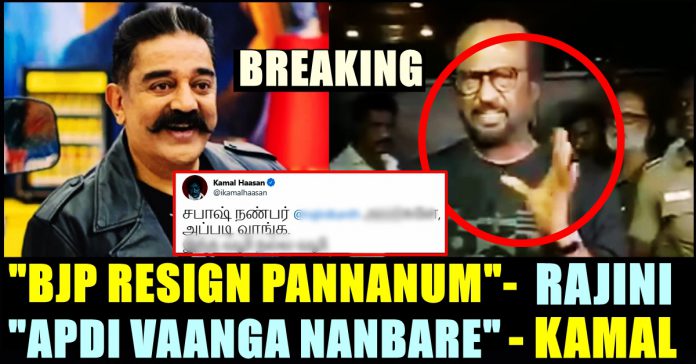 Rajinikanth has made his statement regarding the ongoing protest and the violence that is taking place in Delhi followed by that. The Tamil film star lashed out at the central government for not controlling the riot with iron hands. So far 22 people have lost their lives in the Delhi riot which took place between CAA and Anti CAA supporters.

Rajinikanth said that a protest must not turn into violence and blamed the central government for letting it to continue in a time when an important personality like Donald Trump is visiting our country. He reiterated that he will stand by muslims only if they got affected by the Citizenship Amendment Law, not while protesting against it.

“The ruckus in Delhi is only because of the failure of Central Government’s intelligence. They must have controlled it with iron hands. I am expecting them to be cautious in future.” said Rajinikanth in the press meet. “I severely condemn those who are involving in politics by using religions. I request media not to provoke citizens.” said Rajinikanth who added that there will be no possibilities to vopus the CAA as it got passed by the government.

“For saying this they are labelling me as BJP supporter. It is hurting me much, especially while seeing some senior magazines stating such opinions” the Superstar actor said. He further added that central government should resign if they couldn’t control the violence.

It is very well known to all of us that Ulaganaayan Kamal Haasan and Superstar Rajinikanth are the two pillars of Tamil cinema. Both them achieved many milestones in their respective career and fan base of both the actors is immense even today.

On their political career front, both the actors are all set to compete in the assembly election of 2021. They even promised to join hands in politics if it is required. Kamal Haasan is currently busy in working for the sequel of his blockbuster film Indian whereas Rajinikanth completed shooting for “Darbar” and signed his next film with “Siruthai” Siva. Rumours are also doing rounds that they are going to join in a project together under Kamal Haasan’s Rajkamal production house. The film is going to be directed by Lokesh Kanagaraj according to sources.

Comment your views on Rajinikanth and Kamal Haasan joining hands together !!

Indian Captain Virat Kohli came up with an emotional tweet after losing the final match against New Zealand in the World Test Championship. The...

While players from foreign countries are leaving to the home town amidst the worsening state of COVID 19 spread in country India, Australian pacer...