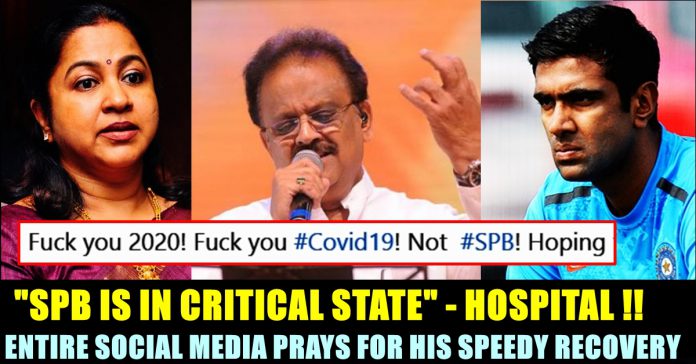 Legendary singer SP Balasubramaniam who was admitted to hospital last week due to COVID 19 infection, faced setback in the improvement of his health, according the statement released by Hospital management. The MGM Healthcare where the singer has been undergoing treatment for over a week, is currently critical and has moved to the Intensive care unit.

As soon as the news surfaced, people in social media started praying for the speedy recovery of the prolific singer who has sung more than 40,000 cinema songs in 6 languages in his career which spans nearly 54 years. Earlier, on 13th of March, a report emerged saying that the condition of the singer is stable and said that he is maintaining a normal oxygen ssturation.

However, within hours of the report, the hospital management has released the press not saying that his condition is critical. “There has been a setback in the health of Thiru SP Balasubrahmanyam who had been admitted at MGM healthcare for symptoms of COVID since 5th August 2020. In a late night development on August 13, 2020 his condition has deteriorated. And based on the advice of the expert medical team attending to him, he has been moved to the Intensive Care Unit (ICU) and he is on life support and his condition remains critical. He is currently under observation by the team and experts from critical care and his haemodynamic and clinical parameters are being closely monitored.” read the statement of the hospital.

The singer himself announced that he has been infected with the virus on 5th of August. The singer who started getting treatment, released a video saying that he will be discharged soon due to the very mild symptoms he was suffering with.

Check out the live he posted on 5th of August :

Entire social media is worried on seeing the Hospital management’s statement and are praying for the well being of the legendary singer. Along with enormous number of fans Cricketer Ashwin and his wife Prithi also posted a tweet praying for the recovery of SPB.

Omg!! My prayers for the great SPB to recover. #SPBalasubrahmanyam

Oh no. Prayers for a speedy recovery. https://t.co/8fgCHyWLQY

My prayers to #SPBalasubrahmanyam sir for a speedy recovery.

Let us hope & pray that the omnipotent’s grace reverses the setback in #SPBalasubramanyam s health & he recovers to enthral us with his beautiful songs. Wishing #SPB speedy recovery.

My prayers for #SPBalasubrahmanyam sir speedy recovery ! He’s gonna come back stronger than before…

So hoping that the great #SPBalasubrahmanyam recovers fully.

Fuck you 2020! Fuck you #Covid19! Not #SPB! Hoping for some good news. #SPBalasubrahmanyam

After my moms death on last month its ur songs keeps me going on.. Pleas come. Back sir… Get well soon #SPBalasubrahmanyam

Let us pray for our beloved SPB to combat the virus and get well soon !!

On Sunday, Tamil nadu based Oscar winning high profile musician A.R Rahman uploaded a picture in his official twitter account in which he was...

"Paravai Muniyamma" is known among Tamil cinema audience for her unique way of singing and for her onscreen appearances in films like "Dhool" ,...