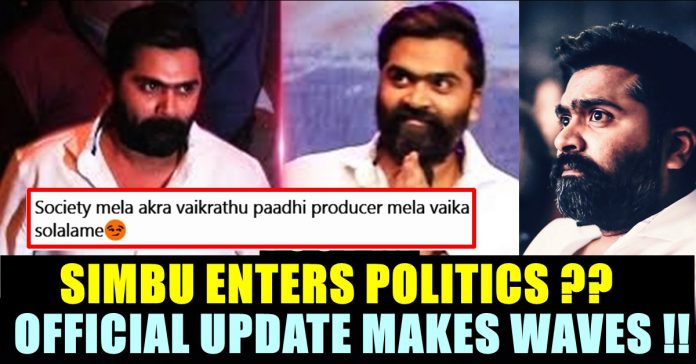 The actor who was last seen in “Vantha Raajava Thaan Varuven” by Sundar C as protagonist, has attended shoot of the 50th movie of Hansika, his former girlfriend. There were shooting spot pictures of Simbu with gautham Karthik were also released which is a movie produced by Gnanavel Raja. It was said to be a remake of Kannada remake “Mufti”.

Now the actor is going to return to Chennai with a big plan. According to his PRO, Simbu is going to reach Chennai very soon. After reaching, he has planned to meet some of the important representatives of his fan club. He has planned to make significant changes and improvements in the organisation. The tweet also says that he has big plans for the well-being and the betterment of the society.

Once #STR returns back to Chennai, he plans to meet important representatives of his fans club members, discuss certain changes & improvements that can be made in the organization. He has big plans for the well-being and betterment of our society. Expect the unexpected. 🤞🏽

This instigated the speculations of STR entering into the politics of Tamilnadu. He was already planned to collaborate with “Nam Tamizhar” leader Seeman who said that he is going to direct Simbu in near future. It is also notable that his father T.Rajendar owns a political party “All India Latchiya Dravida Munnetra Kazhagam” which was initiated in 2004.

Simbu who never missed to raise his voice in political issues made important statements regarding “Cauvery issue”. Check out some of the reactions for STR’s future plans :

He should first have plans for the well being and betterment of his producers who have been waiting for months and people who have suffered losses when associated with him, let alone the society.

I hope he will also meet directors and choose good movies 😊

We need STR to jump into politics 💪🏻

As soon as “Manadu” drop announced, STR announced that he is going to make a movie titled as “Maghamaanadu” which is going to be produced under his own banner. The film reported to have 125 crore rupees as budget.

What do you think on this announcement made by STR ?? Comment your views below !!

Reports on the routine of arrested police officials in Thoothukudi jail regarding the Sathankulam double murder case has emerged. Sub-Inspector Raghu Ganesh got...