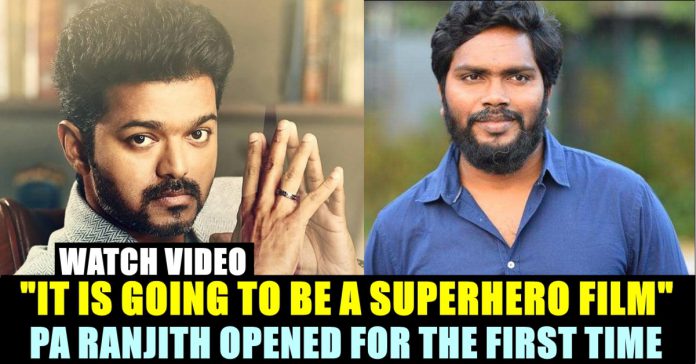 JUST IN: Ranjith Opened For The First Time About His Film With Vijay!!

The 38-year old Kollywood director Pa Ranjith who has given blockbuster movies has opened up for the first time that he gonna do a ‘Superhero’ film with Thalapathy Vijay. He stated that in an interview with Anupama Chopra and Baradwaj Rangan of Film Corporation South. In the interview video was 40 minutes, Pa Ranjith discussed the impact of books in his life, the lessons he learnt from many legends. His intention of making a superhero film with Thalapathy Vijay was the highlight of the video.

Pa. Ranjith is an Indian director and filmmaker who makes movies in the Tamil language. He made his directorial debut with the 2012 romantic comedy Attakathi. He made a superhit political drama movie ‘Madras’ in 2014 which created him a fan base. In 2016, he wrote and directed the gangster-drama movie ‘Kabali’ and in 2018, ‘Kaala’ both starring Super Star Rajinikanth. Recently his movie ‘Sarpatta Parambarai’ got a release and it has become one of the most-watched Tamil movies of the year 2021.

The blockbuster movie director, Pa Ranjith is working on his upcoming movie ‘Natchathiram Nagargirathu’ it is said Kalidas Jayaram and Ashok Selvan will play the lead roles. After this, the director is planning to make a movie with Vikram, who is in the shooting of the movie Ponniyin Selvan. Apart from this. Ranjith is planning to make a superhero movie starring Thalapathy Vijay.

Thalapathy Vijay’s last movie was ‘Master’ which is an action thriller film written and directed by Lokesh Kanagaraj. After the success of his movie, Vijay is expected to be on screen in the movie, ‘Beast’ which is to be directed by Nelson Dilipkumar and produced by Sun Pictures. Touted to be an action thriller, it stars Pooja Hegde, along with Yogi Babu, Shine Tom Chacko, VTV Ganesh and Aparna Das in supporting roles.

After this interview, Thalapathy Vijay’s fanatics couldn’t keep calm. They are waiting to see their Thalapathy as a ‘Superhero’. Moreover, it is a combination of Vijay and director Pa Ranjith, who has given blockbuster movies for the past few years. It is sure the movie would reach out to many as his past movies already did.

Check below for the comments of the video.

The most awaited Suriya's "Soorarai Pottru" film has been decided to get an online release by the makers of it. Announcing about it in...

Vanitha Vijayakumar who is currently reviewing the ongoing Bigg Boss season, slammed Archana for not considering to say a "Hi" in public functions. The...