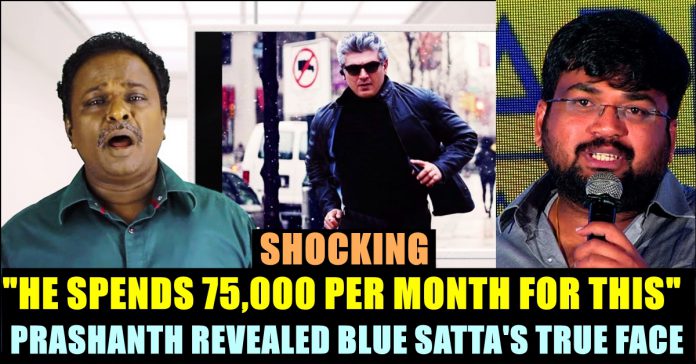 Being one of the prominent movie reviewers of Kollywood films, Blue Satta Maaran debuting as director and planned to elevate his film career to the next level. Suresh Kamatchi who was supposed to produce Simbu’s “Maanadu” is going to produce this movie of Maaran.

Blue Satta caught in controversy many times for bashing films without considering the profile of actors or the directors of the movie. He had clash with the makers of the films often. “Goli Soda” Director Vijay Milton condemned him for the way he reviewed the movie “Vivegam” which had actor Ajith in the lead.

Recently a case was filed against him by “Amma Creations” Siva for his way of reviewing Charlie Chaplin-2 movie. In the review he criticized the makers by accusing them for not having common sense. Blue satta Maaran is very well known for his rural slang, funny phrases, short stories and real life incidents in his movie reviews. For his unique style of movie reviewing, the man who always wears blue shirt has a separate set of fan following and his youtube channel Tamil talkies enjoys more than 9 lakh subscribers.

Today, an unknown fact about the reviewer has been revealed by his fellow reviewer Prashanth. In his tweet, Prashanth said that Blue Satta Maaran has raised more than 1 lakh saplings with different varieties. He also revealed that Maaran is spending 75,000 rs. per month of his own money to plant them in various villages.

His tweet read as “Annan @tamiltalkies has raised nearly 100,000+ saplings of 100+ varities and spends around 75,000 rupees every month from his own pocket to plant them in various villages. To me – he is the real Sadhguru !!”

Annan @tamiltalkies has raised nearly 100,000+ saplings of 100+ varities and spends around 75,000 rupees every month from his own pocket to plant them in various villages. To me – he is the real Sadhguru !! #CauveryCalling

In a way of accepting the fact and showing gratitude, Blue satta thanked Prashanth through his twitter account :

Check out some of the reactions for Prashanth’s review :

Why call him #Sadhguru?

He has his own identity.

On the work front, Maaran successfully completed his first feature film’s first day shoot. He thanked his followers after the wrap. Check out his tweet regarding that :

Happily wrapped up our shoot, end of day 1.

What do you think on this unknown face of Blue Sattai Maaran ?? Comment your views below !!

Previous articleSakshi Agarwal Directly Slammed Abhirami’s Supporter For This Reason !! Check Out !!
Next articleMan Escaped From Paying Fine For Not Wearing Helmet !! Check Out The Reason He Stated !!