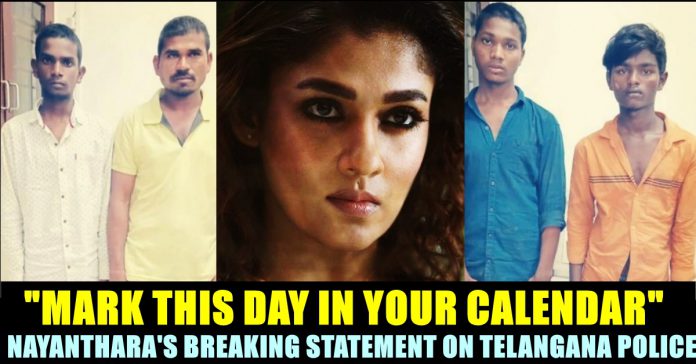 Many celebrities with vast fan following has supported the decision of Telangana Police to kill the four rapists in encounter. While one set of people are blaming the police officers for killing the accused without getting them a legal punishment, another set of people are celebrating it by saying that it is a lesson to people who think of committing such crimes in future.

Actress Nayanthara, one of the very few actresses who are staying away from social media platforms, has released a press statement regarding the encounter of the four men. In her statement said “Justice is good when served hot. What’s been a cinematic phrase so far has become the reality today and the real heroes- Telangana Police have prove it with their action. I would call this “A RIGHT ACT OF HUMANITY”. Every woman of this country can mark this date in the calendar as a day of true justice. Speaking about humanity, it’s all about respecting, showing love and compassion towards all with equal quality” read the statement of the “Vallavan” actress.

Further her press release said “More than rejoicing over the justice served, it is a moment to enlighten and educate the children, especially boys at our homes imparting them the message that men become the hero, when they make this planet a safe place for women” read her statement.

The number of crimes against women in India is increasing day by day. The series of recent happenings of rape and murder shook the entire country and is making a very big impact in social media. As soon as the pictures of the criminals who gang raped and murdered Priyanka Reddy released, people in social media demanded an immediate justice with severe punishment to them.

In a way of reacting to it, In a massive twist in the development of the rape and murder case of Hyderabad Veterinary doctor Priyanka Reddy, Police officers have shot the four criminals alleging that they tried to escape while they accompanied the criminals to the scene where the crime happened to reconstruct it. It was reported that two policemen have injured.

Apart from Nayanthara, top actresses such as Samantha, Rakul Preet Singh, Rashmika Mandanna, sports personalities Saina Nehwal, PV Sindhu has supported the decision of the Telangana police. These Celebrities Reacted To The Decision Of Telangana Police !!

What do you think on this statement from the “Naanum Rowdy Thaan” actress ?? Comment your views below !!

Previous articleVideo Of Virat Kohli Accepting It As A “Revenge” Goes Viral !! WATCH !!
Next articleDid Director Atlee Copy This Too ??

In India, the idea of adopting GST was first suggested by the Atal Bihari Vajpayee Government in the year 2000. The state finance ministers...