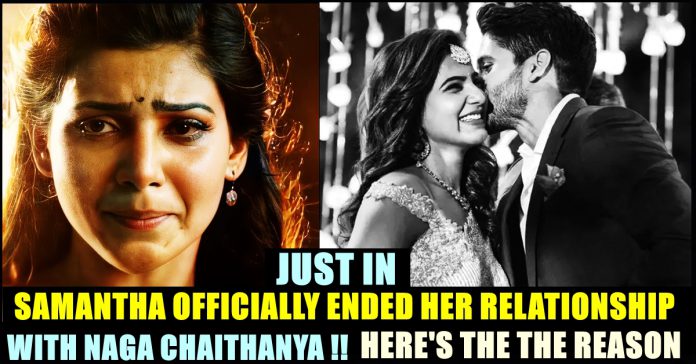 “To all our well wishers. After much deliberation and thought Chay and I have decided to part ways as husband and wife to pursue our own paths. We are fortunate to have a friendship of over a decade
that was the very core of our relationship which we believe will always hold a special bond between us. We request our fans, well wishers and the media to support us during this difficult time
and give us the privacy we need to move on. Thanking you for your support” read the post of Samantha whereas Naga Chaithanya uploaded the same by changing the name Chay as Samantha.

It all started when the actress changed her social media handle names from “Samantha Akkineni” to “S”. Media started creating theories saying that the actress is demanding Rs. 250 crore as alimony for the divorce. The actress who blasted at a reporter who asked about the same to her when she visited Thirumala temple, had kept mum whenever such questions popped up in front of her.

Recently, during the question and answer session with her followers, Samantha said that there hundreds of rumours are emerging about her and brushed them off saying that none of it are true. When a fan asked “Are you really shifting to Mumbai ?”, Samantha answered to him/her saying “I really don’t know where these rumours started from but just like hundred other rumours, this is also not true” through a video.

Samantha got married to Naga Chaithanya in Goa as per traditional Hindu customs on 6 October 2017 and then by Christian customs on 7 October 2017, and became a member of the Akkineni family. Now, after nearly four years, the couple had officially announced about their seperation.

Previous articleMemes Linking Thalapathy Vijay With “Maanadu” Trailer Are Flooding Internet !!
Next articleVJ Parvathy Shared About The Troubles She Faced As A Woman In Her Life !! WATCH

Director Cheran became a subject to trolls and memes after responding to a birthday wish made by the official social media handle of SUN...

Eashwar Ragunath who was accused by TV actress Jayashree for domestic violence has appeared in front of press for the first time after the...