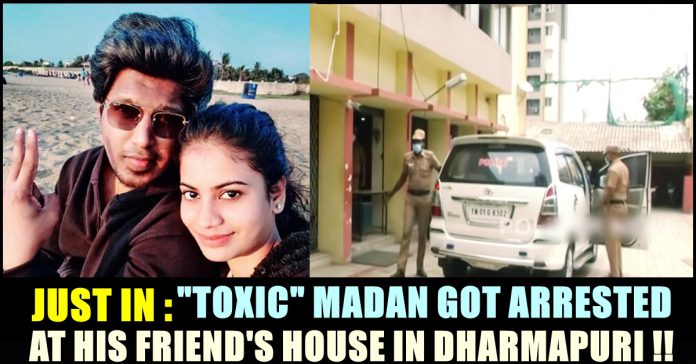 Madan Manickam who is popularly known as “Toxic” Madan or Madan OP, got arrested by a special team of police at Dharmapuri at the wee hours of Friday. He was hiding at the residence of one of his friends, says the reports. He was accused of degrading women through his youtube videos by using obscene language. It is notable that Krithika, wife of Madan who helped him in uploading videos got arrested and is currently lodged in Puzhal jail.

More than 160 complaints were made against Madan so far from across the state. He was also involved in cheating money from his subscribers. Based on the confessions of Krithika, Police are planning to interrogate Madan, says report. Madan didn’t reveal his identity through his youtube/Instagram accounts and Police got the pictures of Madan from his wife’s mobile. Photos of the accused released in Internet for the first time after the arrest of Krirthika.

Madan is expected to be brought to Chennai on the evening of Friday. Police have confiscated a computer system in the residence of him which is located in Perungalathur. Officials have recovered 200 plus videos from his system. Police is going to investigate about his three expensive cars and about his investment in Bit coin and Share market.

Despite of the complaints and accusations that were emerged against Madan aka “Toxic” Madan, his supporters defended him saying that he has a heart to help people and slammed people who criticized him in social media platforms. Recently, a recent report of Polimer channel said that Madan never donated a single rupee to any one and invested the income he gained through his youtube channels in Share market and Bitcoin. The channel said that the youtuber who boasted himself as a generous individual to his subscribers, cheated them by staging fake donations.

When Madan’s lawyer approached high court seeking anticipatory bail, Judge who heard the case said “Argue after hearing his audio grabs” to the Lawyer who sought anticipatory bail for “Toxic” Madan. Police officials have expressed strong disagreement with the court issuing bail for Madan, says the recent report. According to reports, when the lawyer stated that it was the complaint made by the Judge said that the talks of Madan are intolerable to hear and asked Madan’s lawyer to argue after hearing them.

Previous articleMadan Invested His Income In Share Market, Bitcoin In The Pretext Of Donating : Report
Next article3 Girls Arrested After Blackmailing A Man With His Nu*e Video !!