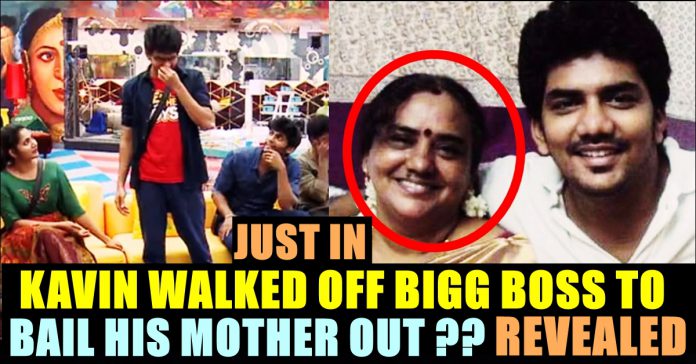 Kavin who walked out from the Bigg Boss house, bailed out his mother from jail according to the report of Puthiya Thalaimurai. As soon as Kavin got out of the Bigg Boss house with 5 lakhs, the viewers of the show including the evicted contestants started filling Internet with their opinion on his decision. Though the housemates compelled Kavin to stay inside the house for 3 more days till weekend, Kavin adamantly went out of the house without considering the tears shed by Losliya and Sandy.

Now the reports suggests that the actor bailed his mother and grand mother out from jail. Kavin’s mother has been sentenced for 5 years jail along with two other family members for chit fund fraud case. The judgement was passed in Trichy court on 29th August.

Dhamayanthi, one of the three females who got sentenced lives in K.K Nagar Trichy. She has a daughter named as Rajalakshmi and a daughter-in-law, Raani. Rajalakshmi is the mother of Kavin, the Saravanan Meenakshi actor. According to reports, Arunagiri, husband of Dhamayanthi and her son Sornarajan had a chit fund company without proper permit from 1998 to 2006. 34 members has been a part of it and paid money.

Reports says that they haven’t paid back the money to any of them. The complaint was registered in Trichy economic crime division on 2007. The investigation started taking place since then. Earlier, regarding the case, 31 people gave statements against the accused. After hearing the argument between both the prosecutions and the statements of 31 people, Judge Kirubakaran Madhuram passed Judgement on the case by sentencing 5 years of prison for all the accused and ordered to pay fine Rs.2000. Judge also ordered them to give 29 lakhs to the victims. If they failed to pay the money, Judge ordered to confiscate the properties of the accused.

Kavin who was not aware of this while being inside the house, started working on releasing his family members after coming out of Bigg Boss house and successfully bailed them out.

Report also says that he promised to give back the money to the victims of his Grandmother’s chit fund company. Internet started reacting as soon as this new surfaced :

I am Happy Just Only For That Mother, No idea she is involved in something or not, but as she is a mother i am happy if she is out.

However, it is not known if Kavin deliberately went out of the house with 5 lakhs to rescue his mother from Jail. What do you think on this ?/ Comment your views below !!

Previous articleSTR Made His Come Back From Abroad !! INTERNET EXPLODED !!
Next articleWATCH : “She Did It Completely For Attention” Vanitha Opens For The First Time About Madhumitha Controversy !!

These Handpicked Memes & Trolls On RCB Will Make You Go ROFL !! CHECK OUT !!

Ever since the Indian Premier League (IPL) scheduled was announced, there was huge anticipation about the season opener. The defending champions Chennai Super Kings...

For The First Time, H.Raja Recommended A Tamil Film !!

For a change, H. Raja tried positive publicity this time to promote a Tamil film and we have to wait and see if it...