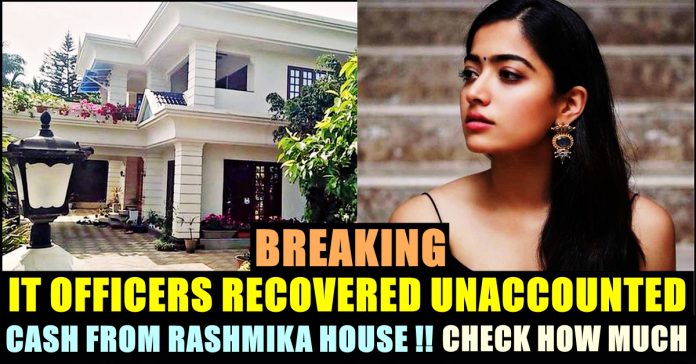 A Team of 10 Income Tax officers have raided the residence of South Indian actress actress Rashmika Mandanna on the 16th of January. Rashmika Mandanna is one of the very few actress who got fame and place in the hearts of many fans in a very short span. The actress is known for pairing up with South Indian sensation Vijay Devarakonda. She acted with him in “Geetha Govindham” and “Dear Comrade”. Despite being part of very few films, the number of fan pages in social media for the actress is sky level. The Geetha Govindam actress is one of the first candidate who was highly believed to be paired with actor Vijay in “Bigil” but Nayanthara bagged the role later.

Rashmika Mandanna rose to fame among Tamil audience through the song “Inkem Inkem” song from Telugu movie “Geetha Govindam”. Though she is yet to appear in a Tamil movie, she is very much popular among Tamil fans due the fan pages in social media platforms. A recent update says that she is going to appear in a Tamil movie for a first time through actor Karthi’s Sultan.

Her recent release “Sarileru Neekevaru” with Telugu Superstar Mahesh Babu became a blockbuster. In a promotional interview of it, Rashmika was asked by reporters whether she has joined the list of highest paid actress or not to which Rashmika answered to them by replying that she needs to work hard for a long time to join the list.

Now, IT department which suspected Rashmika to have unaccounted money or property in her name, conducted a raid in her residence in Kodagu, Karnataka. On the morning of 16th, around 7 30 AM, a team of ten members conducted the raid for more than 10 hours in Rashmika’s house. As Rashmika was not in the house at the time of the raid, the officers inquired her father about the accounts and documents till the next day. The raid also took place in Rashmika’s marriage hall and in her Petrol bunk, according to Nakkeeran.

According to reports, Rashmika has applied to start an International school and Petrol bunk in her home town which made the IT department officials to suspect and to conduct an immediate search in her house. Rashmika who was in Chennai for shooting during the raid, was ordered to appear in the Bangalore Income tax office on Monday with her father.

The reports also suggests that IT officials has recovered 25 lakhs of unaccounted cash from the actress’s house. Rashmika has decided to approach the issue legally, added the source.

A twitter user who claims to be a film critic through his bio, reviewed Ponniyin Selvan three das before the film's release and his...