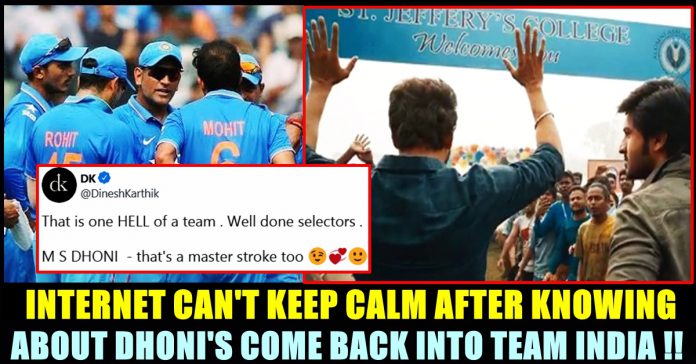 JUST IN : Internet Can’t Calm After Knowing About Dhoni’s Entry Into Team India !!

Internet users can’t keep calm after knowing about the entry of former Indian captain Mahendra Singh Dhoni’s into team India as a mentor. Board of control for cricket in India announced the squad for team India for the upcoming T20 world cup which is going to take place from 17th of October in UAE. With Ravichandran Ashwin making it into 15 member the squad, BCCI surprisingly announced about Dhoni’s presence in team India as a mentor.

As soon as the announcement was made, hashtag “Thala” started trending in the micro blogging social media site, celebrating Dhoni’s come back into the team who announced his retirement after playing the semi finals of World Cup tournament 2019. Along with fans, celebrities, cricket experts and former cricketers has been celebrating Dhoni’s appointment as team India’s mentor for the upcoming tournament.

MS Dhoni after making a surprise entry into the Indian dressing room for #t20worldcup2021 😄 pic.twitter.com/xhJtxqes7m

That is one HELL of a team . Well done selectors .

Congrats to everyone but more so to @ashwinravi99 and @chakaravarthy29 from my neck of the woods. Well done boys 👍❤️ https://t.co/ovJlGBH95g

The tournament now is a formality. Cup is ours. https://t.co/CUcskaC7rC

Three biggest names of Indian team in this generation will be in UAE for the T20 World Cup.

Ronaldo is playing for Manchester United

Dr. Octupus is in a Spiderman movie

Dhoni will be in Indian dressing room in a new role

When these three Virat Kohli, Rohit Sharma and MS Dhoni Will be seen together again for India in T20 World Cup 2021 – Then The Emotions, feeling, excitement will be on top and Sky. "The Legendary Trio" pic.twitter.com/LL2XqYxQNS

Again he is in blue jersey 🥺#Dhoni #T20WorldCup21 #T20WC pic.twitter.com/i7VpGsExVx

Previous articleTwitter User Shared His Experience On Being Cheated By A Transgender!! Check Reactions!!
Next articleChennai Software Engineer Gets Arrested For Stalking Woman!!