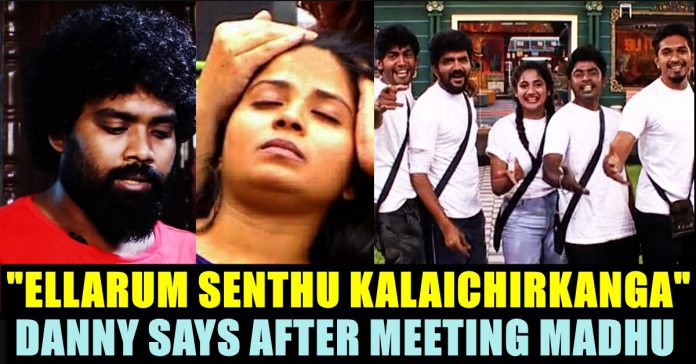 Daniel Annie Pope, former contestant of Bigg Boss show and one of the leading comedy actor of Tamil cinema has met Madhumitha after her termination. Madhumitha and Danny worked together in number of films and their first and popular collaboration was from Vijay Sethupathy’s Itharku Thana Asaipattai Balakumara.  Both of them rose to fame through the film and gained face recognition from Tamil film audience.

Daniel, in this interview with Indiaglitz, says that he met Madhumitha and was shocked to see the depth of her injury. “She said that she couldn’t lift things but she is alright. She asked me to inform everyone that she is alright. Madhu is a kind of a woman who damages others instead of damaging herself. I myself couldn’t believe that she did this to her” said Danny in the interview.

“When I asked her about the whole incident Madhumitha said that she could not tell what really happened as she still has an agreement with the channel. She said that it is not a suicide and confirmed that she did it only to prove her point. She also said that they all teased her to the extreme.” added Danny who spoke with her in person after the termination.

Bigg Boss Madhumitha was terminated from the Bigg Boss house due to breaking the rules of Bigg Boss show. It is the second time in the same season, a contestant getting terminated for behaving beyond control. Madhumitha’s was considered as one of the contestant to win the title.

While terminating her, Bigg Boss said that during an argument between Madhumitha and the housemates after a task, the OK OK actress hurted herself to prove a point she stated. The actual reason behind the incident is Madhumitha while talking to Cheran about the swimming pool being empty as a sign of water scarcity in Tamilnadu, Madhumitha reportedly said “Varuna Bhagavan kooda Karnataka Kaarar Pola Thanner Tharamal Vanjikiraar” (Even Varuna Bhagavan is cursing Tamilnadu like Karnataka people by not providing water).

This statement from Madhumitha irked Sherin who immediately confronted her for talking ill about her state. Kavin, Mugen, Sandy, Losliya, Tharshan who were already involved in argument with Madhumitha started opposing her statement it seems. Even few contestants told Bigg Boss that they would evict themselves from the house if Madhumitha stayed. At one point, to prove that her care for Tamilnadu state is true to, Madhumitha hurted her wrist with a sharp tool. It seems no one in the house except Cheran and Kasthuri paid attention to what Madhumitha did which is evident through the conversation between Kamal Haasan and Kasthuri is yesterday’s episode.

Even after her termination, no contestant seemed to care for Madhumitha’s absence which worried Danny who expressed it in the interview. What do you think on these statements of Danny ?? Comment your views below !!

Previous articlePeople Slammed Abhirami For What Happened To Madhu !! Check How She Handled Them !!
Next article“Trollers, Do Something Useful” Sakshi Directly Slammed Kavin & Losliya Army !! Check Why !!

Jayam Ravi’s 24th film has been titled Comali. The actor shared the news on his official Twitter handle along with the title look of...

In a recent interaction with Behindwoods youtube channel, actress Yashika shared about the traumatic experiences she came across before becoming an actress in the...

Recently Mahat, one of the dear friend of actor Simbu came up with a furious statement regarding the recent two sensational video of Simbu....