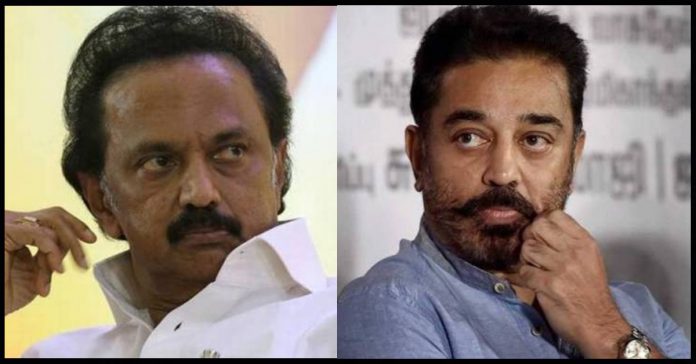 Ahead of the Tamil nadu assembly elections, a news has been surfaced saying that DMK is going to have an alliance with Kamal Haasan’s Makkal Needhi Maiam and it has been reported that 25 seats have been allotted for the three year old Kamal Haasan led party, according to Asianet.

Earlier, a buzz on Kamal Haasan meeting Udhayanithi Stalin to discuss about alliance was surfaced in media but the former denied it. Now, reports emerged saying that the alliance has been confirmed between the two parties.

Congress party which is having 6.5 % of vote bank have decided to ask 40 seats from DMK. The administrators of Congress party doesn’t want DMK to treat MNM and Congress equally and decided to grab more seats for the upcoming Tamil nadu assembly elections. This has led to a huge confusion between the alliances of DMK party. A senior leader of DMK party has reportedly stated that MK Stalin will be sidelined with Kamal’s emergence.

Makkal Needhi Maiam’s one of the prominent propagandas is to bring a change in Tamil nadu and the political parties which are having alliance with DMK are refusing to accept it. It is also reported that the members of Makkal Needhi Maiam got disappointed with their stand.