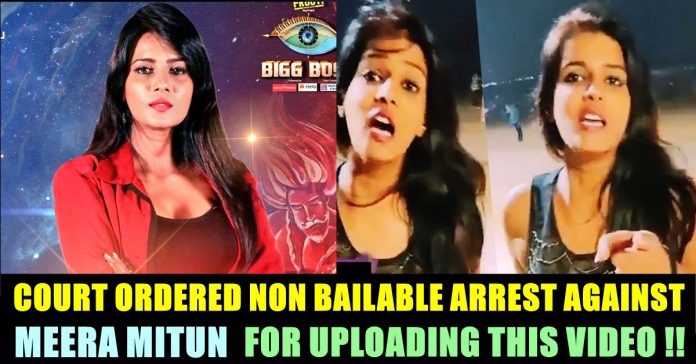 Kerala Police has issued a non-bailable arrest warrant against controversial personality Meera Mitun, reports have emerged. Recently, a tweet about her death surfaced in her own twitter account and the aspiring actress was inactive for a week. However, she became active now and an arrest warrant has been issued against her for one of her old videos, according to Indiaglitz.

The tweet about her death was posted on 11th of September and there were no tweets from the twitter handle till today. Now, she became active as before by accusing the top-tier actors. The former Bigg Boss star who is known for her controversial allegations against high profile individuals in film industry, has been constantly posting tweets against highly paid actors of Kollywood.

After making her re-entry to twitter after 6 days, Meera Mitun accused the trending poster of “Kamal Haasan 232”. On Wednesday, Director Lokesh Kanagaraj and actor Kamal Haasan has announced that they will be working together in an untitled project and it will be released during the summer of 2021.

She said that Lokesh is not using his creative brain and acknowledged a tweet which said that the poster of “Kamal Haasan 232” is a copy of “The Amityville Horror”, a french film. After accusing Director Cheran for physically assaulting her, Ulaganayagan Kamal haasan for nepotism, Superstar Rajinikanth for promoting himself during COVID 19 pandemic, Trisha and Nayanthara for copying her style, actress and model Meera Mitun, recently said that she is going to stop Kamal Haasan from hosting the 4th season of the Bigg Boss show. For past few weeks, she abused actors Vijay, Suriya and the wives of the actors.

Her accusations made director Bharathi Raja and actor Suriya to react, The “Ayan” actor asked his fans to spend their energy on useful things. Now, it has been reported that a video Meera Mitun released against the people of Kerala, has turned out as a police case.

According to reports, Meera Mitun aka Thamzihselvi has posted a video few months back speaking ill of Kerala people in her twitter account. In the video, the model, allegedly used abusive language against them. Now, a First Information Report has been registered in Kerala and a non bailable arrest warrant has been issued against Meera Mitun. The video uploaded by the actress is considered as a serious offense and Meera Mitun is expected to be arrested soon by the Kerala Police.

Reports have suggested that a leading lady advocate has initiated the case. Court have ordered the Thodappuzha police to arrest Meera Mitun and Biju Jacob, sub inspector of Police at Idukki has said that the investigation has started.