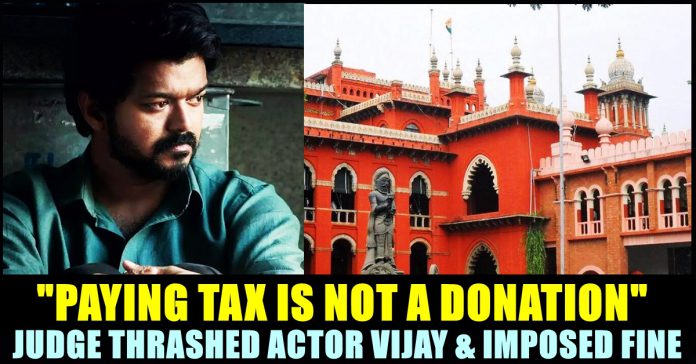 Madras high court imposed Rs. 1 lakh fine for actor Vijay who sought tax exemption on a luxurious car that got imported from foreign. It has been reported that the “Gilli” actor imported a Rolls Royce car from England in the year 2012. He was asked to pay entry tax by the Assistant Commissioner of Business Taxation. Followed by that, Vijay filed a petition in Madras high court in the year 2012, seeking tax exemption.

Vijay, in his petition, claimed that he already paid tax to import the vehicle from England and complained about the entry tax that was demanded to him. Vijay enjoys a huge fan base across the globe and is known as one of the influential personality from the cinema industry. The way he performs in the screen inspires millions of youngsters and many of them, including kids could be seen imitating his style, looks, mannerisms etc. The news about himself claiming tax exemption grabbed headlines with people expressing their displeasure over the actor.

He who is known for predominantly appearing in Tamil films, was last seen in “Master” directed by Lokesh Kanagaraj. The actor who debuted 27 years ago in the Tamil film industry, influenced enormous number of youths and kids through his onscreen presence. Several fan clubs are being operated across the state only to celebrate him. He is all set to appear in Nelson Dilp Kumar’s “Beast” which is being produced by Sun Pictures. Vijay is one of the highest paid actors in country India and rumours stating that he got Rs. 70 crore as salary for acting in “Master” and even more to act in the upcoming film “Beast”.

Actor Vijay who is known for his huge fan base in Tamil nadu, is currently basking in the success of his recently released "Master"....

The reality show Bigg Boss Tamil is back with the third season, and reportedly, Kamal Haasan will be hosting it yet again. As two...