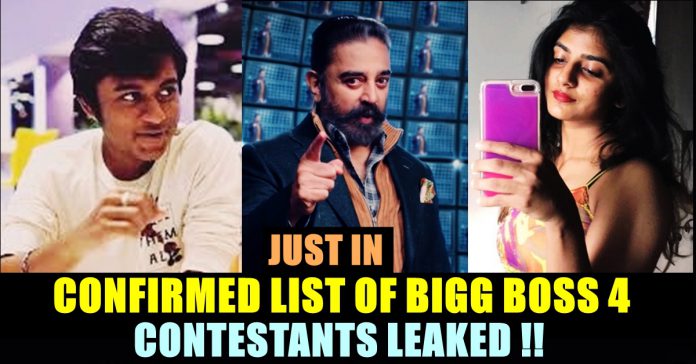 Few of the contestants of upcoming BIGG BOSS 4 show has been revealed and reports have said that they are currently home quarantined to participate in the show. After so many speculations and predictions, contestants of Kamal Haasan hosting show after the channel released the making video of the promo of the 4th season.

Big Boss 4 is all set to stream from the first week of October month and the makers of it are busy producing promotional videos for it by having actor Kamal Haasan as the main man. Speculations on the 14 participants are doing rounds in social media platforms.

Now, as far as the upcoming season’s contestants are concerned, Ramya Pandiyan who rose to fame among Tamil internet users through her photoshoots has been home quarantined to participate in the show.

Actress Gabriella who is known for her appearance in “3” film as Shruthi Haasan’s sister is also going to take part in the show, according to reports.

Instagram fame Shivani Narayanan has been confirmed as a contestant as well.

Surprisingly, Aajeedh who rose to fame among TV audience through his participation in Super Singer Junior is also going to enter the Bigg Boss house as participant.

“Jithan” Ramesh, son of veteran film producer R.B Chowdhary and brother of popular actor Jeeva is going to take part in the show, according to sources. He was last seen in Simbu’s “Osthi” as a brother of the former.

Rio Raj who debuted as protagonist through “Nenjamundu Nermayundu Odu Raja” has been confirmed as participant, reports suggested.

Senior actor Anu Mohan who is famous for uttering a single dialogue in Rajinikanth’s blockbuster “Padayappa” is going into the house as participant, believes Internet.

Apart from these names, Abi Haasan, son of veteran actor Nasser is expected to take part in the show. His participation is yet to be confirmed.

#kadaramkondan fame #AbiHassan could be IN.
Talks are in full swing.

Note: His dad is a friend of #kamalhaasan and his mom is in #MNM.#biggbosstamil4 pic.twitter.com/uNkMCYlg4H

Kiran Rathore, Sanam Shetty, Shalu Shamu are some of the other names that are doing rounds in social media platforms linked to the contestants list of Bigg Boss 4. However, we have to wait till the first week of October month to know the complete list.