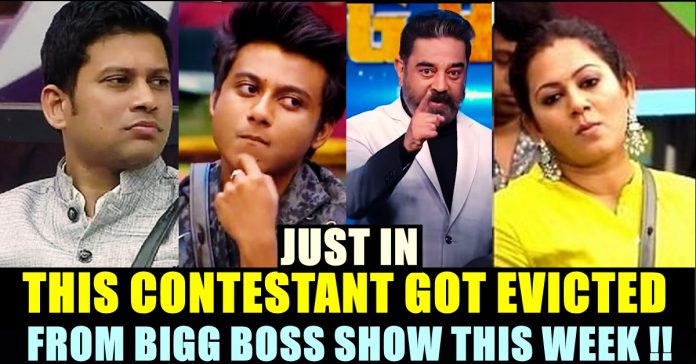 As the shooting of the weekend episode for Bigg Boss season 4 has commenced, eviction result got leaked in the social media platforms as usual. The first promo released by the channel management showed Kamal Haasan reiterating that there are only 31 days left in the show. He said that audience started showing their intention in choosing a deserving winner through their votes.

So far, the show has witnessed a number of controversies, confrontations, arguments, quarrels and some interesting physical tasks. Now as far this week’s evicted contestant is concerned, it has been reported that popular host who was working in Zee Tamil got evicted from the show.

Archana entered the house on the 10 day as a wild card contestant. Followers of the Bigg Boss show firmly believed that she is involving her co-contestants such as Rio, Som, Nisha, Jithan Ramesh in groupism. She had gained enough number of haters for forming a gang and ruining the spirit of the game by making her gang vote for a single person whom they wants to get evicted from the show.

Her idea of using “love” as strategy didn’t work among the audience as well. The way she broke down in front of Balaji and requested him to be her son became a troll material among the netizens. Now, a strong rumour is doing rounds saying that Archana got evicted from the show.

Check out some of the reactions in social media for Archana’s eviction :

Totally ruined her career outside 😬🙄#BiggBossTamil4

Archana could dodge eviction as she was never in nomination. This is her second time in nomination and got evicted too#BiggBossTamil4

Looks like Archana is evicted. But I wanted Aajidth to be evicted due to his atrocities along with Bala this week and also for his overconfidence. Archana was the worst without any doubt but she was good when it comes to tasks and Aajidth didn't do anything

I'm in dilemma whether I should be happy about #Archana getting evicted or feel irritated that now #Ajeeth will think audience are highly impressed by his contributions 🤧😞. Innum overa pesuvane. Double eviction pls 😔😔😏 #BiggBoss4Tamil #biggbosstamil #BiggBossTamil4 pic.twitter.com/6dNb9j0GL3

Archana evicted 🙂 Unexpected. I was thinking she won't go out because she won captaincy task but glad she is gone. Now without Archana, We will be able to see real faces of other hms. #BiggBossTamil4

Lets see who does Archana chooses as next week's captain.