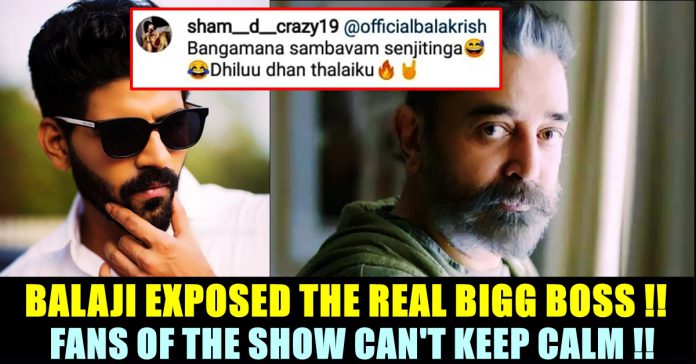 Though the identity of Tamil Bigg Boss was revealed by a number of Tamil media portals, there was no official word from the people who are associated with the Kamal Haasan hosting show yet. Now, Balaji Murugadoss, runner up of season four has commented on an Instagram post of the real Bigg Boss and exposed him. He who fondly asked Bigg Boss call him as “Thambi” during his stint inside the house, called the real Bigg Boss as “Annan” and confirmed the identity.

Initially they said that Vijay TV actor Amit Bhargav who is known for acting in a serial named “Kalyanam Mudhal Kaadhal Varai” is the one who plays the role of Bigg Boss behind the camera. However, when media approached, he completely denied it and said that he lent voice for Kannada Bigg Boss once but never worked with the management of Tamil Bigg Boss show.

Later, many people believed that “Maanada Mayilada” fame Gokulnath is the one who is providing orders to the contestants of Bigg Boss. It turned out to be a mere rumour as well. Recently, it was revealed that an artist named “Sasho Satiiysh Saarathy” who is known for acting in a Bollywood film named “Manjunath” is acting as “Bigg Boss” in the Tamil version.

The fourth season of Bigg Boss show got completely with Aari Arjunan winning the title. Balaji Murugadoss became the runner up and Rio Raj grabbed the second runner up spot. Throughout the four seasons, celebrities who participated as contestants had a good bonding with the Bigg Boss voice and always obeyed him.

Now, after the show reached its end, Sasho became active in social media platforms and has been uploading motivational videos. On Wednesday, he came up with a post uttering a quote on “Who are you ?”. He said “I have been thinking, All our lives, We fight for acceptance and validation from others. Leave alone accepting ourselves, Do we even acknowledge who we are ? Think about it” in his trademark voice.

The video garnered huge reception and many of his followers started commenting dubbing him as “Bigg Boss” in the comment section. The most important comment came from the runner up of the Kamal Haasan hosting show. Balaji Murugadoss, one of the most talked about contestant commented on the post writing “Ena anna epdi irukinga 😂” (Hey brother, how are you?)

Check out the screen shot of his comment below :

This comment from Balaji received hilarious reactions from the followers of the 100 days show. One of a fan said that he commented on the post and exposed the real identity of Bigg Boss to the world. It is notable that Balaji requested Bigg Boss to call him as his “Thambi” (Younger brother) in confession room he called him as “Anna” (Older brother) now to make things sure.

Check out some of the reactions for the comment of Balaji :

Sasho is being followed in Instagram by some of the other Bigg Boss contestants such as Aajeedh, Sherin, Rio Raj etc as well. Comment your views on this impulsive behaviour of Balaji Murugadoss !!

On 8th of March, Yuvaraj, a self styled leader of a caste Hindu outfit was sentenced to life-time imprisonment for the murder of a...