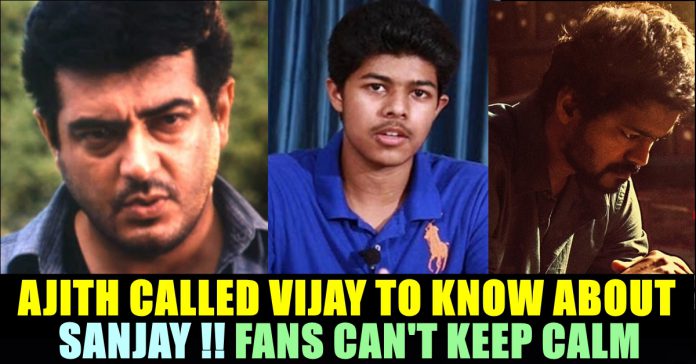 A news on Vijay being worried about his son who is currently studying in abroad, grabbed the headlines of several news portals. Reports suggested that Sanjay is pursuing a course in filmmaking in Canada and due to the lockdown crisis, he couldn’t travel back to India. The reports said that Vijay is constantly contacting him through phone call and has been advising him to stay indoors.

Meanwhile, today, a news has surfaced saying that actor Ajith phone called Vijay to inquire about Sanjay’s well being. Ajith kumar who is considered as a rival of Vijay since mid 2000s, has a strong friendship with the “Master” actor since early 90s. They both acted together in a movie named as “rajavin Parvayile and their friendship became evident in certain occasions. Recently, in “Master” audio launch, Vijay said that he got inspired from his friend Ajith and wore suit for the first time in an audio launch event.

According to the source, Ajith asked if Sanjay is doing fine in Canada and Vijay replied to him by saying that nothing has to be worried about. They often call each other and discuss about various things, says the source close to both the celebrities.

Sanjay, the 19-year-old son of Thalapathy Vijay, has worked on a number short films which are available in youtube. The youngster has always shown interest in acting and has even played a cameo in Vijay’s hit film Vettaikaran. Having a lot of his father’s resemblance, Sanjay is all set to be debuted by director Shankar after his film studies, according to sources.

As soon as the news of Vijay calling Ajith surfaced, fans of both the actors couldn’t keep calm as they started reacting to it in a way of celebrating the friendship between their favourite stars.

Man of Humanity for a Reason #Ajith #Valimai #ValimaiDiwali pic.twitter.com/m7bhUdn5Zu

In Canada, over 27,000 people got infected to the virus contagious virus and the death toll crossed over 850. Across the world, more than 20 lakh people reported positive for the virus and the deadly virus killed more than 1 lakh people. On the work front, Vijay and Ajith are expected to be seen in “Master” and “Valimai” respectively. Both the films got interrupted due to the coronavirus crisis and expected to resume post lockdown.