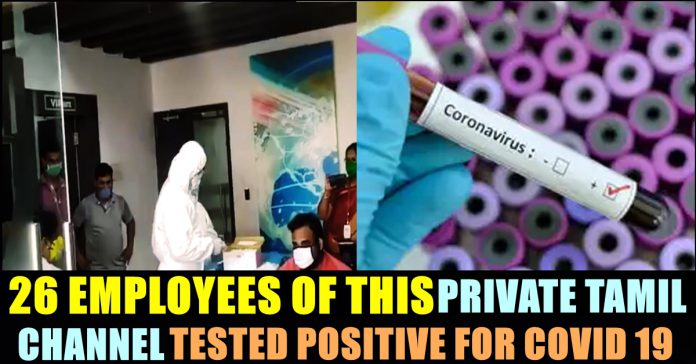 The whole world is terrorized right now and is combating the deadly disease COVID 19 to avoid heavy damages. The virus killed more than 1,70,000 people across the world so far and is expected to spread more. Every countries are implementing safety measurements such as social distancing and are keenly intended in maintaining hygiene. The disease initially discovered in China and the most affected country due to the disease is Italy. However, the main, accurate reason behind the virus is still undiscovered.

Tamilnadu conformed 1477 positive cases so far and 15 people died of the disease so far. The central government has ordered the states to continue lockdown till 3rd of May month. On Sunday, 105 positive cases reported and 43 more positive cases reported on Monday. Now, as the results of 26 people from Sathiyam Tv showed positive, many people are expressing their fear over the existence of community spread in state Tamilnadu as the news is spreading like wildfire. sathyam TV’s MD has addressed the press and said that there will be no live telecast from now on and added that he will abide by all the rules of the government.

Earlier, a 24 year old press reporter of a daily newspaper, tested positive and was admitted in Rajiv Gandhi government hospital. The entire street in Triplicane where he lived was sealed by the officials. On 20th of April, 3 reporters from Chennai reported positive for the novel coronavirus.

Tamilnadu currently has 31 testing labs, including 10 private labs. People are strictly advised to stay at home to avoid the spread of virus. The state government earlier announced that there will be a relax in lockdown after 20th of April and withdrew the announcement soon after seeing the number of positive cases increasing in the state.

Previous articleMob Attacked Doctor For Trying To Bury His Colleague !!
Next articleDulquer Salmaan Body-Shamed This Woman In His Film ??