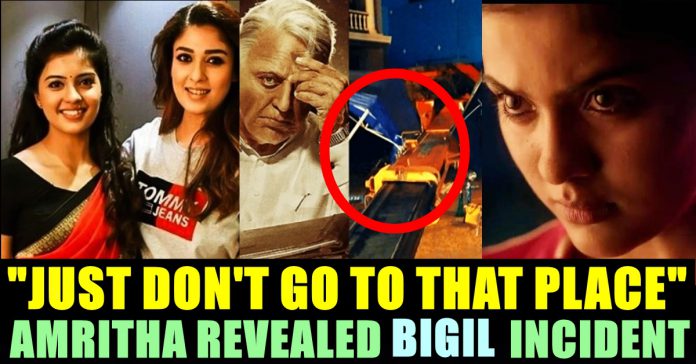 The heart breaking news of the demise of three hard working technicians of Indian 2 shook the entire Tamil film industry. An aspiring film director named as Krishna, An aspiring art director Chandran and a personal assistant of Director Shankar Madhu died on the spot as soon as a light set-up on top of a crane fell on the crew who were at the spot. The rope that was used to hold up the set-up gave way, according to reports. Along with three technicians who were killed, as many as 10 people got badly injured.

Many celebrities and fans expressed their condolences to the families of the technicians. Kamal Haasan and Kajal Agarwal who were present at the spot shared about the trauma they went through last night. Meanwhile actress Amritha Aiyer who acted in actor Vijay’s Bigil also shared her experience in the same spot during the shooting of “Bigil”

Before Bigil, Amritha made her film debut with Padaiveeran, where she played the role of Malar. She was later seen playing one of the female leads opposite Vijay Antony in Kaali. Her portrayal in Bigil as captain Thendral gained her vast number of fans and followers. To make herself available to the fans, the actress became active in social media platforms by posting her photos and updates. Now, in a way of reacting to this horrific accident Amritha shared her experience in the same spot during the shooting of Bigil.

In her Instagram story Amritha revealed that a same kind of light fell on a person during Bigil shooting. The actress said that she and her crew members shattered like the crew of Indian 2 by sharing the tweet posted by Kamal Haasan. She wished people not to go to the spot to shoot and asked not to go at all as the place contains lot of negative vibes. She expressed her condolences to the demised souls.

In her Instagram story, the actress wrote “That place is actually horrifying, the same kind of light fell on a person during BIGIL shooting and we were all shattered just like this one. This is really sad !! I just wish people don’t go there to shoot again or just don’t go there, lot of negative vibes. May their soul rest in peace”

Here’s the screenshot of the story posted by Amritha Aiyer :

Actress Kajal Agarwal who is playing the role of the lead lady in the film also shared what she went through last night. She said that all it took was a fraction of second to take place. The actress said that she learnt the value of time and life through the accident who expressed her condolences for Madhu, Krishna, Chandran. ( Also Read : Kajal Agarwal Reacts On The Horrific Accident Of Indian 2)

Former Bigg Boss contestant Kasthuri Shankar who had a confrontation with Vijay Tv over salary issue, questioned about a delete promo of the ongoing...