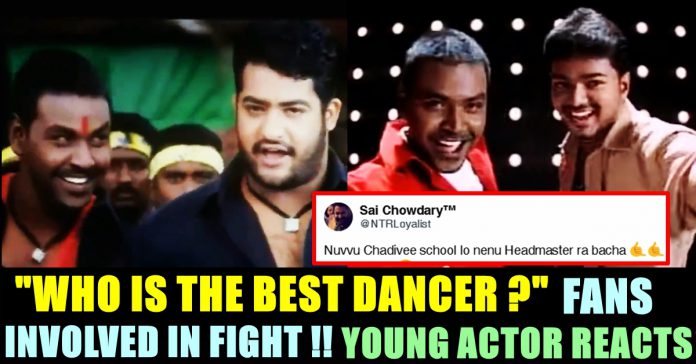 Recently a twitter using Tamil cinema fan posted a video of the opening song from the movie “Thirumala” in which actor Vijay and Dance choreographer Raghava Lawrence would dance together. The user posted the video with a caption saying “If ur bad I’m ur DaD….”

On seeing this video one of a Tollywood fan shared a video of Junior NTR performing dance with Raghava Lawrence. “Enga Paaru” the user wrote in his caption :

Followed by this, in a way of giving a counter attack to the tollywood fan, the user uploaded a video of actor Vijay dancing along with Prabhu Deva in the opening song of “Pokkiri”. He wrote “Go to school kid.. 😌 “ while uploading the video :

That didn’t end there as the fan of Junior NTR came up another video of his favourite hero dancing along with Kajal Agarwal in the song.

To this video, the user posted the video of Vijay dancing in the opening song of the movie “Kuruvi”

On seeing this twitter war between fans, Shanthanu who is one of an ardent celebrity fan of actor Vijay asked the fans not to compare with each other. “Junior NTR is one of the finest dancers we have all witnessed ! No comparisons pls 💛🙏🏻”

On the work front Shanthanu who is busy in the shooting of Thalapathy 64, committed in few more projects as well. He was last seen in Mupparimanam and has recently signed his next with Madha Yaanai Koottam director, Vikram Sugumaran. Titled as Raavana Kottam, the film was shot in a village near Ramnad lately.

What do you think on the piece of mind gave by Shanthanu to the twitter users ?? Comment your views below !!

Previous articleDarbar Single Copied From This Old Song Of Top Star ?? WATCH !!
Next articleSelva Raghavan’s Emotional Message On The Demise Of Bala Singh !!

Nayanthara will share screen space with Thalapathy Vijay after 10 years in his 63rd movie. After the great success of Sarkar, Vijay started work on...