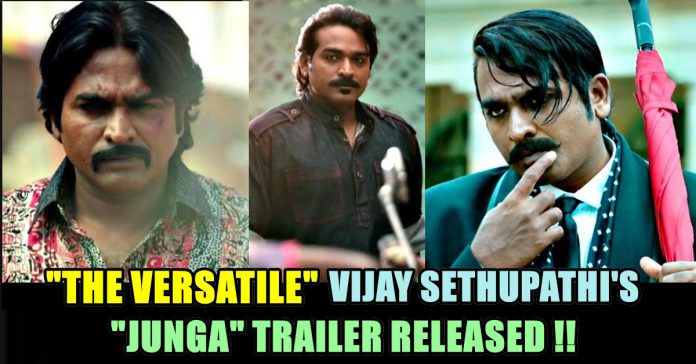 The trailer of Vijay Sethupathi’s forthcoming film ‘Junga’ which also stars Sayyeshaa in the lead, has been released along with the audio of the film today. After playing a menacing villain in ‘Vikram Vedha’, looks like Vijay Sethupathi is back to playing a fun filled don, like ‘Soodhu Kavvum’. The trailer reveals that Vijay Sethupathi plays Junga, a don who lives with a budget, which seem to create a lot of funny moments in the film. To give a glimpse of the comedy that is to come in the film, while growing to be a big don, he also gives away flyers that say 30 percent off for a murder with a free kidnap, calling it the Junga Summer Offer.

Touted to be a gangster comedy, the film is being directed by Gokul of ‘Rowthiram’ fame. Produced by Vijay Sethupathi himself, under the banner of Vijay Sethupathi Productions, ‘Junga’ also stars Madonna Sebastian in a cameo, while Radha Ravi, Suresh Menon & Yogi Babu will be seen in an important role.

Meanwhile, Vijay Sethupathi has an interesting line-up this year and will soon start work on his Telugu flick ‘Sye Raa Narasimha Reddy’, with Chiranjeevi in the lead. Vijay’s much-awaited ‘Chekka Chivantha Vaanam’ with Mani Ratnam is also scheduled for a release this year. Vijay Sethupathi is also working with Thyagaraja Kumarraja for ‘Super Deluxe’, in which he will be playing a transgender  character called Shilpa.

Previous articleThey Came , They Ate , They Quarreled & Now Demanding Money !! : Fake Protesters Atrocities !!
Next articleVijay Sethupathi Asked “Do Anyone In The World Like My Face??” To Me While “Thenmerku Paruva Kaatru” Says Saranya Ponvannan !!

Actress Kajal Aggarwal who is expecting her first child with her husband Gautam Kitchlu, reacted to the trolls, memes and negative comments that were...

Yes. Most of the people are suffering without employment due to lockdown, many permanently lost their jobs, Entrepreneurs Struggling, Marriage ceremonies postponed, people in...