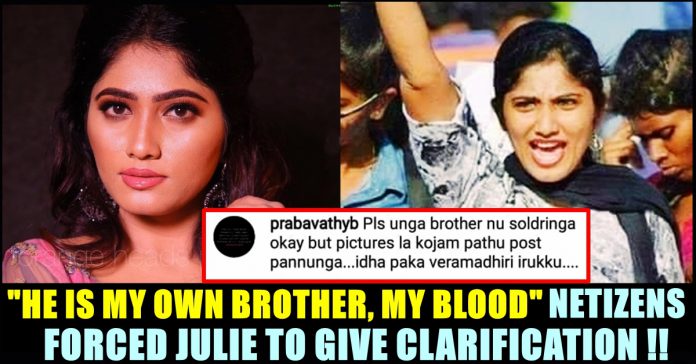 Julie of Bigg Boss season one fame, is pretty much active in social media platforms nowadays. She who is currently participating in “Bigg Boss Jodigal” show as one of the contestants, has been uploading pictures from her photo shoots in her official Instagram account and also updating about her followers about her works, personal life etc. Most recently, she uploaded a picture with her brother and received inappropriate comments from her followers and was forced to give clarification. She also slammed a media portal for making derogatory headline about her post.

“En uyir … My another mother @antony.joshua.58 ❤️🥰 My own brother” wrote Julie as her caption before uploading the post. Check out her post below :

Reacting to this post, a follower asked Julie to think before uploading pictures and said that the ones she posted looks like “something else”. Replying to him, Julie said that it depends on people’s perception. “He is my first son, mother and everything” her reply read.

To another follower who said that one should think before uploading pictures in “social network”, Julie said that dress doesn’t decide one’s character. “Body is just a part that everyone has and it’s not vulgarity and not something to be commented with vulgarity” read the reply of the former Bigg Boss contestant.

Here are the screen shots :

Reacting to similar comments, Julie uploaded a story in her official Instagram account writing “Poor society ( only those who commented bad) not able to understand the holiness and love between brother and sister.. Commenting with vulgarity.. When u grow up ur boy children with so much
love they will never misbehave or look at any girl in a bad way..”

A media portal named Cinema pettai went one step ahead and made a write up with a headline defaming Julie. “Will you write the same for likes and shares when it comes to your siblings ? Don’t you have shame ? He is my own brother my blood” she wrote in her post.

Julie became a familiar face among Tamil speaking netizens, not through Bigg Boss show but through the videos of herself which did rounds during the historical protest of Jallikattu. She gained a huge sum of support from the protesters for her participation in the protest. The way she led a crowd through her slogans attracted many people’s attention which resulted in Julie becoming one of the contestants in Tamil reality game show Bigg Boss, hosted by Ulaganayagan Kamal Haasan. She is currently enjoying 1 lakh plus followers in Instagram and has paired with actor Sendrayan in the ongoing “Bigg Boss” jodigal show.

Team Chennai Super Kings climbed to the top of the table after registering a comfortable victory against Royal Challengers Bangalore. Ravindra Jadeja's all round...