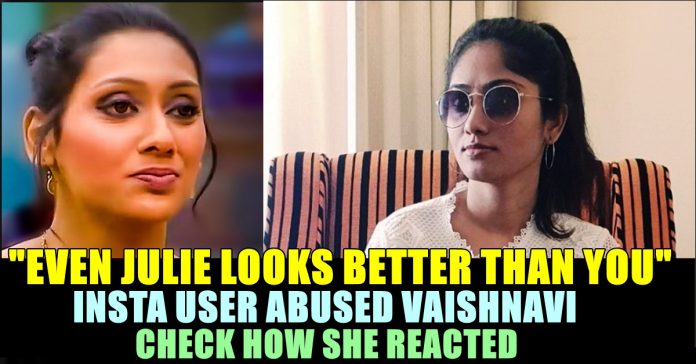 One of the female Bigg Boss celebrities of last season named Vaishnavi Prasad has got married recently. She the only Tamil Bigg Boss contestant so far who stayed inside the Bigg Boss house even after her elimination is just got married to her boyfriend.

She is known for being one of the most controversial housemate while being inside the Bigg Boss house. After Bigg Boss, the aspiring actress is now very much active on social media platforms. She several times exposed the chat of her inbox where many social media users will be seen abusing and asking weird questions.

Vaishnavi Prasath is an Indian Journalist and radio jockey. She is the granddaughter of Saavi’s Sa. Viswanathan, who is a senior journalist and the founder of the magazine Saavi. Vaishnavi is currently a Radio Disk Jockey (Radio DJ) in Chennai FM 104.8 FM. She has formerly worked in Secret Society, Lifetime and Lensational.

Vaishnavi married to her longtime boyfriend Anjan with whom she earlier Vaishnavi did several dubsmashes. He is a pilot by profession. The marriage function took place few weeks back without any media attention and only close relatives took part in the event according to IB times. 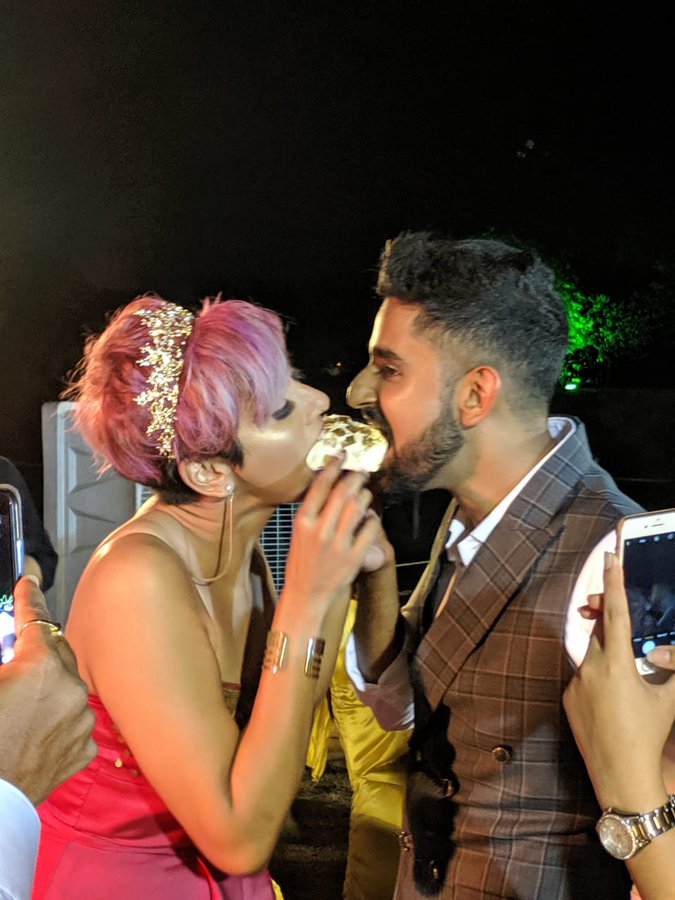 Yesterday Vaishnavi uploaded a Tik Tok video as her Instagram story to which one of her follower replied as he/she is feeling really bad for Anjan. “Pity your guy.. am sorry.. your guy looking handsome but you yunkkkk.. looking more old you.. pray for your guy” it was written as a reply to her story according to the screenshot posted by Vaishnavi herself.

Followed by that, there was another message saying that Julie is looking better than Vaishnavi. Sharing the screenshot Vaishnavi wrote “Anyone else want to send me toxic entitled message so I can block you/ report your judgemental asses ? Go ahead, you are just making my life easier”

She also blocked another person who abused her with a caption saying “More abusive, toxic people making it easy for me to block them” She also blocked a person who asked her to grow some hair. “If you send messages like this be assured I will block you” she added. Earlier, the Bigg Boss contestant involved in a big time verbal spat with Twitter users for not wearing “Thaali” at her wedding. Through one of her post, Vaishnavi said that they have not spent money on gold for the wedding. Her post read as “We didn’t have a thaali /mangal sutra, we didn’t have an exchange of rings, and we didn’t buy ANY gold /diamonds /jewelry for this occasion. I wore artificial jewelry which I picked up at @hm / @Forever21 on both days, and did my own make up too.”

We didn’t have a thaali /mangal sutra, we didn’t have an exchange of rings, and we didn’t buy ANY gold /diamonds /jewelry for this occasion. I wore artificial jewelry which I picked up at @hm / @Forever21 on both days, and did my own make up too. pic.twitter.com/2hoAaQVLeW

What do you think on these replies Vaishnavi receiving ?? Comment your views below !!

Previous articleDhoni Indirectly Confirmed His Retirement By Doing This In World Cup ?? Heart Breaking !!
Next articleChennai Girl Paid Rs. 40,000 To A Fraud To Eat One Plate Of Biriyani !! SHOCKING !!

A dermatologist by profession, Sethuraman who is best known for 2013 comedy flick "Kanna Laddu Thinna Aasaya" passed away due to a cardiac arrest...