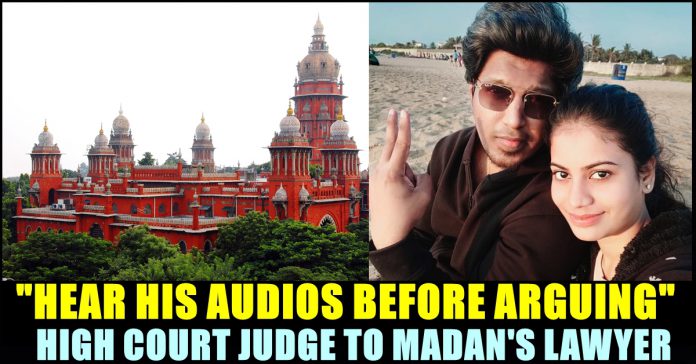 Police officials have initiated actions to restrict their bank accounts as they earned money from several underage children and kids who belong to influential families. Police have reported that they bought three expensive cars through the earnings. Actions to present Krithika in Egmore court has been initiated, according to the reports. Madan and Krithika started living together since three years ago and didn’t register their marriage legally. They also have a 8 month old baby, said Police.

Police officials of Cyber department are investigating Krithika to know the whereabouts of Madan and actions to nab him through technology is also being made. Meanwhile, Madan approached Chennai high court seeking anticipatory bail. On hearing, the Judge reportedly said “Talks of youtuber Madan are unbearable to hear. Come and argue after hearing the audios” out of frustration.

Cases for abusing women and portraying them badly (509), profanity (294 B), Misusing information technology, using banned mobile application has been filed against youtuber Madan who is popularly known as Madan OP aka “Toxic” Madan. He failed to appear before cyber crime police after he was summoned and Police had intensified the search to nab him.

On Monday, Former Minister of Fisheries D. Jayakumar got arrested along with 40 other members of AIADMK party for poll violence. The incident happened...

Video Of Fan Shouting At Anirudh To Make Way For Jonita Is Trending !!

Anirudh Ravichander, one of the best musicians Tamil cinema has ever produced, is currently busy performing for his concert "One Upon A Time". After...