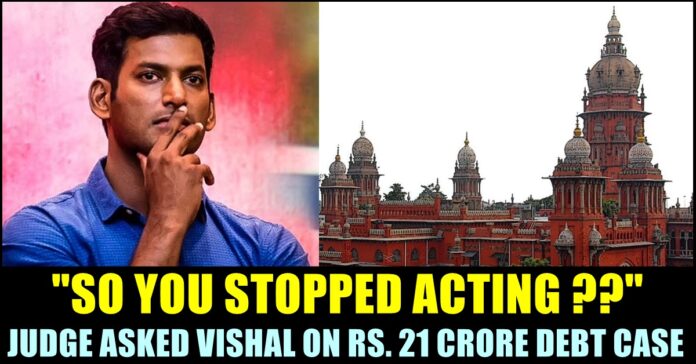 On Friday, Justice Senthikumar Ramamoorthy of The Madras High Court directed actor Vishal to file an affidavit explaining the details of his assets in a case filed by Lyca Productions against the actor in connection with is loan amount of Rs. 21 Crore. Vishal was made to appear in front of the court and the judge, reportedly asked whether his cinema career is finished when the actor said that he couldn’t deposit Rs. 15 crore as the per court’s order even after 6 months.

“Since the actor borrowed money from financier Anbu Chezhiyan, we agreed to pay the loan on the condition that Vishal should assign the rights to the movies produced by his production house. When Vishal intended to release his “Veerame Vaagai Soodum”, he didn’t give us the rights of theatre or OTT. Hence, we approached the court” Lyca submitted through it’s counsel.

The court directed the actor to deposit Rs. 15 crore in a nationalized bank in favour of Registrar General of The Madras High Court but the actor failed to do so. After the court summoned Vishal for his physical appearance, the actor arrived at the court. When the judge asked why he failed to deposit the amount as per the order of court, the actor, reportedly said that he faced Rs. 18 crore loss in a single day and has been paying interest for the amount. The actor cum producer, further said that he can’t be in position even after 6 months to deposit the amount.

Rejecting the contention, Lyca’s counsel said that he has been doing back to back movies and can deposit the amount. The actor is suppressing the facts, the petitioner added.

The judge who was recording the submission asked whether Vishal was coming to say that his film career was over. In reply, the actor said that he has been acting in movies only to pay his debts back but the petitioner has been approaching the court every time to restrain him from releasing his movies.

When Lyca countered saying that the actor has assets and has been getting remuneration for acting in movies, Vishal replied that he does not have any assets. As a result, The judge directed the actor to file an affidavit regarding his asset details and his submissions on September 9.

Previous article“This Is Why I’m Leaving Raja Rani 2” – VJ Archana
Next article“I Have No Money, I’m In My Fourth Stage Of Cancer” – KGF Actor Harish Roy