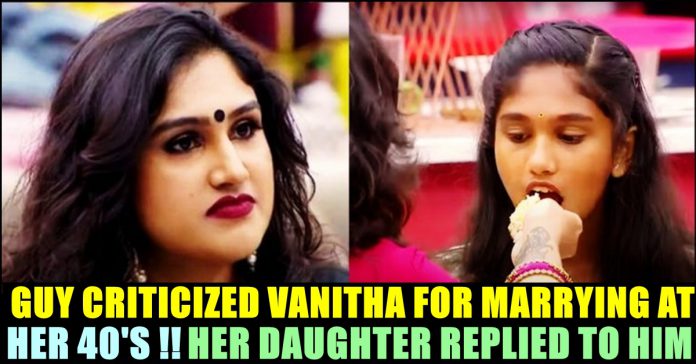 Jovika Vijayakumar, daughter of Vanitha Vijayakumar supported her mother’s decision of marrying Peter Paul and expressed it through a post in Instagram. Replying to the announcement made my her mother in the photo posting platform, Jovika said that her mother should live her life in her own way and there is nothing wrong in that. “I love you and support you 10000% no matter what happens and no matter who says what, because I know you and you are hardworking, loyal, fabulous, cheerful, kind and loving … never forget that!!” the comment of Jovika said.

Capturing the screenshot of her daughter’s comment, Vanitha Vijayakumar posted it with a caption saying “I’m counting my blessings”

To one of a user who said that marriage is not required for Vanitha as she is 40 years old now, and while having kids, Jovika replied to him by saying that is her personal life and the decision she made was her personal choice. Jovika further said that the decision her mother made shows how bold she is. “Even at this she is making herself happy without hurting anyone.” she said.

Check out the reply she made below :

To the one who said that Vanitha is making these replies by using Jovika’s account to defend herself, Jovika wrote “can’t believe we’re in a position where people can’t believe a 15 year old girl can defend her mother and herself, when the same people say everyone should know who to defend themselves.”

Here’s how Jovika replied to another user who confronted her for conversing with her mother in Instagram.

Days before, Vanitha came up with an official note on her marriage explaining how it all happened and on how her daughters reacted on hearing about her relationship with Peter paul. Here’s the announcement Vanitha published regarding her marriage.

Vanitha who gained a separate fan base through Bigg Boss show in Vijay Tv hosted by Ulaga nayagan Kamal Haasan, went on to clinch the title in “Cooku With Comali”, a cookery show which had celebrities of Vijay Television as participants. Now, the actress is very much busy in making contents for her youtube channel “Vanitha Vijayakumar” through which she is keeping her 4 lakh plus subscribers engaged through her cooking related videos.

Doctor Vennila who produced health certificate for Jayaraj and Fenix on 20th of July before Police officers of Sathankulam sending them to Kovilpatti sub...