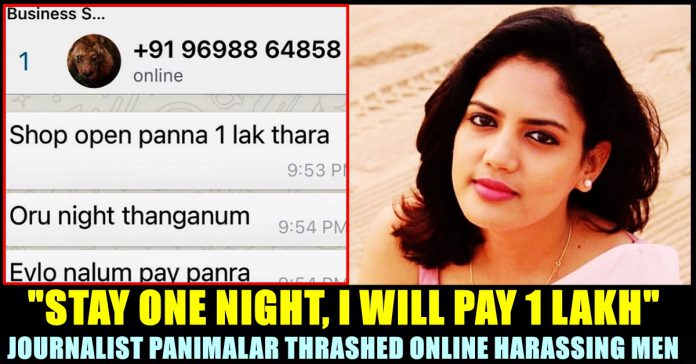 Journalist Panimalar Lashed Out At Online Harassers !! Exposed A Culprit

Panimalar Panneerselvam, who is known for her works as a journalist and a news anchor, lashed out at the online users who are harassing her through their online activities. She exposed the phone number of one of the harassers by uploading the screen shot of the message he sent to her. Through the messages, the miscreant could be seen approaching the journalist to sleep with him. Sharing the screen shot of his messages, Pani malar, condemned him and explained about how such harassers are stopping women from growing economically in their life.

The harasser, approached Panimalar to open a shop that is located in Thirunelveli district. While discussing about the payment, the individual said that he is ready to pay Rs. 1 lakh to open the shop and asks the news reader to stay one night. Reacting to him and other harassers of the same kind, Panimalar uploaded a video lashing out at them. She said that several men are sending such messages and asking women to show their private part.

“Showing nudes and boobs is not my job. All the women has the private parts as same as your mother, wife and sisters. Don’t behave like a stray dog by asking women to show their pictures. If you are sexually frustrated to the core, go to women who are doing this for a living. Pay money and go there. If you have capacity, love a girl, marry her and do things in a proper way. Don’t disturb women in public forum” Panimalar said and warned them of taking legal actions against such people.

Here’s the screen shot shared by the news reader :

She also encouraged women who are willing to do online business not to step back on seeing such harassers in online platforms. “Most of them are cowards. If they really are brave, they would have loved a girl and married her. They are sending messages through online platforms only because they are cowards” Panimalar further said.

“In the time you are searching for nudes and sending you nude pictures to women, we women will be earning money through our hard work. That is the difference between you and us” Panmalar said and wanted women to continue growing despite of receiving such messages from men. Watch the video shared her her below :

A year ago, Panimalar talked about the same topic through a series of her tweets. “I can’t understand the psychological min dstate of men who sends their naked pictures to women. If you guys are thinking that girls would fall for that, sorry brothers, we feel nothing but “disgust”. I have read that women were not created in a way to get attracted to a man’s body structure (Exceptions may exist).” said Panimalar in her tweet to make men realize the real state.

“We know that Masculinity of a man doesn’t depend on a particular body part. Beyond that we are witnessing men who proves themselves as real men through their activities in daily basis. We are not getting committed to them in a romantic relationship or in a physical relationship. In that case, you are not even near to close in getting our attention. Only Discipline and Good habits could attract someone, not indecency” she said through her tweet thread.