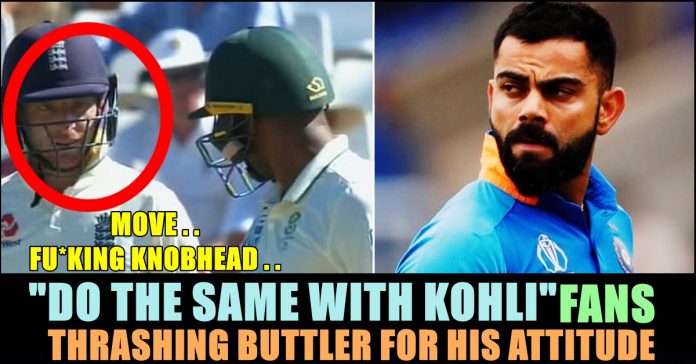 England won the second test of four match series by defeating South Africa with 189 runs. They managed to level the series as 1-1 with the Poteas. Though Ben Stokes helped his team with this outstanding performance, Team England grabbed headlines for completely a wrong reason. A incident that happened when South African player Vernon Philander was on strike disappointed the fans of the game cricket.

England wicket keeper Jos Buttler’s attitude towards Vernon irked the fans who are expressing their hatred towards him. When team South Africa was on a defensive mode to draw the game. The incident took place during the final session. In the over bowled by Dom Bess, a throw of skipper Joe Root from short mid off to wicket keeper Jos Buttler was blocked by Philander without his knowledge.

A visibly frustrated Buttler started abusing the batsman which caught on the stump mic. “Fu***ng Move, Movie. Fu***ng Knobhead” was heard in the stump mic. When Philander staring at Buttler Ben Stokes can be heard saying “Don’t Stare him out, he has a point Vern”

This made many players and fans of the game disappointed. Dale Steyn expressed his thoughts by writing “Well, that was loud and clear.”

Well, that was loud and clear. https://t.co/Mr7ZftfUUg

Other fans who saw the video said that Buttler deserves what Ravichandran Ashwin did to him in the IPL tournament by pointing out the familiar “Mankad” incident. Few fans of Indian cricket questioned if Buttler has the guts to the same with Kohli on field.

Ask @josbuttler if he has the guts to do the same with @imVkohli 🤣🤣🤣🤣 ? Poor sportsmanship of England athletes 👎.

Am I the only person who thinks Big Vern should go find Jos Buttler while he's out and about in Cape Town tonight to finish the conversation the 'keeper started earlier today?

only @ashwinravi99 knows how to handle a kid like buttler 😂😂

Gentlemen's game they said.
Listen to this Prick.@josbuttler
You are fine cricketer mate @benstokes38 ,
This is absolutely disgusting. https://t.co/a9dvvGMcfc

What do you think on this behaviour of Buttler ?? Comment your views !!

A doctor’s intimate photos were shared on social media by her ex-boyfriend as a revenge when she complained against him on a women’s helpline...

Premam is a 2015 Indian Malayalam-language romantic comedy film written, edited, and directed by Alphonse Puthren. It is a three-part coming of age portrait...