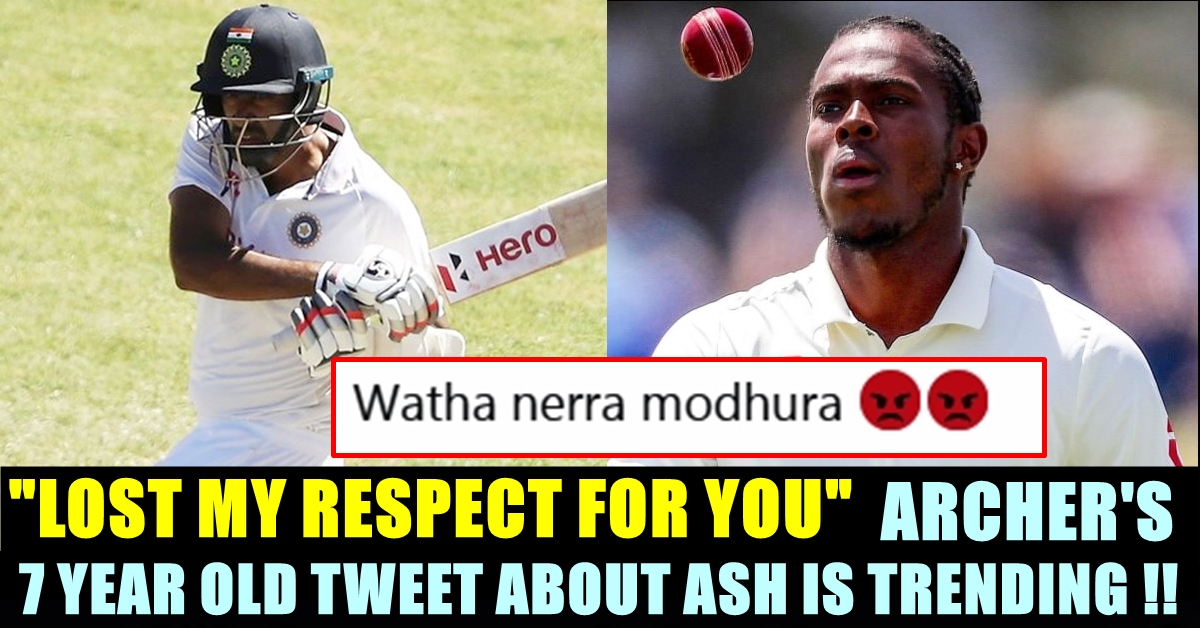 Team India is struggling and looking for all the ways to draw this ongoing test match by just having four wickets in the hands. With Shubman Gill losing his wicket to James Anderson, Pujara, Rahane, Pant and Washington Sundar also returned to pavilion by just scoring single digit scores. Now, the home team requires Ravichandran Ashwin and Captain Kohli to stay in the crease till the stumps to save the match. Meanwhile, to make him edge the ball, Jofra Archer, consistently bowled bouncers to Ashwin which attacked his wrists, his spinning fingers and helmet. The Chennai based cricketer required the assistance of physiotherapy in a constant manner only to face Archer again.

Meanwhile, a seven year old tweet of the England pacer is going viral among the netizens with reactions slamming him for bowling such bouncers to Ashwin despite of his injury. In the tweet which was uploaded on 11th December of 2013, Archer wrote “Men killing ashwin”

The tweet was uploaded by Jofra Archer during India’s third One day International match against South Africa in the year 2013 where the spinner conceded as many as 63 runs in the 9 overs he bowled without taking a wicket. South Africa scored 301 runs in the match which was interrupted by rain.

The 7 year old tweet is gaining attention from the fans of Indian cricket team now, after the bowler attacked Ashwin with repetitive bouncers. Many said that Archer is referring to himself as “men” and one of the fans wrote “i have lost respect for u”

Check out some of the reactions that are surfacing now for the seven year old tweet :

i have lost respect for u😡🤬

please leave him. he has to bowl in the next matches. pic.twitter.com/F2iuGnmLh7

mf you are men

He even predicted his own future.

Archer is Men
Men is Archer

This is Horror Jofra…

You should become Astrologer, you will have a good base here in India.

However, Ashwin got out for 9 runs while trying to cut the ball bowled by Jack Leech. Ashwin faced 44 balls and tried to stay till the end of the day but the extra bounce played the spoil sport for him. Comment your views on this tweet of Archer !!

Ravindra Jadeja Announced Retirement ?? Fans Had “Mini Heart Attack” On Seeing This Tweet Of Him
Rahane Getting Slammed By Fans For Not Contributing Under Kohli’s Captaincy !!