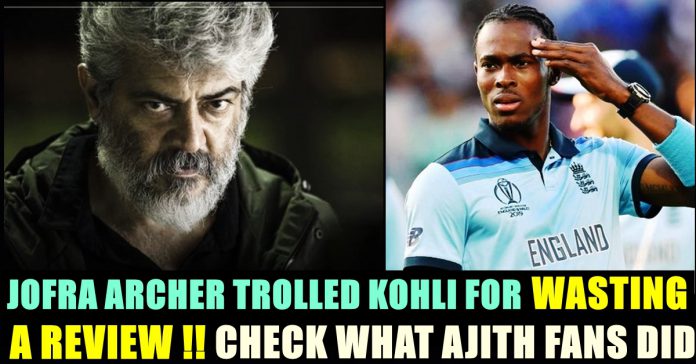 New zealand humiliated India by winning the first test match by having 10 wickets in hand. Now, as the fans are expecting India to give them right back, skipper of the national side got out for just 3 runs in first innings and wasted a review. India ended up scoring just 242 runs in the first innings and New zealand scored 38 runs with no wicket during the stumps of day 1.

The 31 year old misjudged a straight ball from Tim Southee and given out by umpire when he was just 3 runs. As soon as getting out, Kohli had a brief conversation with his non-striker Cheteshwar Pujara and went for a review. However, the TV umpire after checking the delivery again, suggested the on field umpire to stay with his decision. The right handed batsman who has a poor record in taking DRS reviews, succeeded only 2 times in Test cricket out of 13 times. This made the fans of Indian cricket unhappy as they started expressing their disappointment in social media platforms.

England pace bowler, Jofra Archer took a sly dig at Kohli for wasting a review by laughing out loud through his official twitter account. He posted the tweet immediately after Kohli got out and fans of Indian cricket are very much aware of his intention to troll King Kohli.

Many of the fans warned Archer not to make fun of a batsman like Kohli as he is keen on giving back what he gets on field. One of a fan even reminded Jofra about how Kohli took revenge on Sheldon Cottrell in a recent series. “Don’t mess with our #KingKohli You May be a World class Bowler But Nothing Infront Of our #ViratKohli …” he wrote in his comment. Check out those comments below :

Don't mess with our #KingKohli You May be a World class Bowler But Nothing Infront Of our #ViratKohli … pic.twitter.com/GX5eXxZA9w

Don't do it man. He remembers, and he'll make you remember

Don't mess with him Macha..

The most interesting comment for this tweet is yet to come. Few fans of Tamil actor Ajith Kumar asked Jofra Archer to update about their favourite actor’s upcoming film “Valimai”. These comments surfaced after producer Boney Kapoor failed to update about the film since the Pooja of the film.

What do you think on these kind of comments these foreign bowler are receiving !!